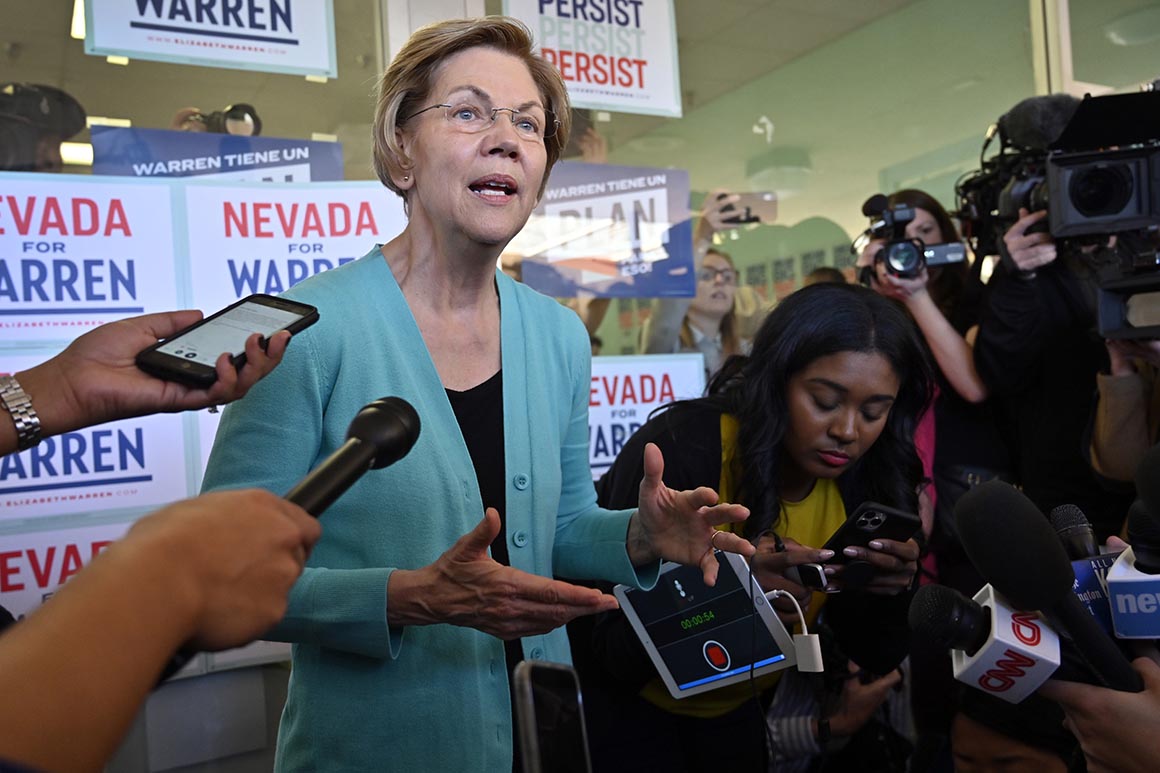 And she kept up the barrage Thursday, repeating and expanding her attacks on the former New York City mayor to supporters, reporters, on “The View,” and anyone else who would listen — seeming to believe that Bloomberg could give her an opening for a comeback.

Warren argued to reporters Thursday that despite jabbing at almost all of her rivals Wednesday night, she wasn’t swinging wildly.

“I think those were very deliberately aimed shots,” she said. “I was very careful about what I had to say that I thought was important.”

The offensive has been a financial windfall for Warren, raising over $5 million in less than 24 hours since the beginning of the debate and giving the campaign a potential lifeline. FEC reports published Thursday showed that Warren only had $2.3 million on hand, with $400,000 in debt at the end of January

Warren, who as recently as last week talked about the importance of not having a Super PAC, is also getting help from a pro-Warren Super PAC which is buying over $2 million in TV ads in Nevada and South Carolina.

“It can’t be the case that a bunch of people keep them and only one or two don’t,” she explained to reporters Thursday about the about-face. “If all the candidates want to get rid of super PACs, count me in.”

Her withering, prosecutorial style since Wednesday night was familiar to friends and allies who have followed Warren’s political rise but it’s also an approach that has largely been absent on the campaign trail, at least when it came to her Democratic rivals.

“She stopped talking about being a fighter and just fought,” said Diane Asadorian Masters, a Boston-based media consultant who worked on Warren’s 2012 Senate race and supports her presidential bid. “I think being the good girl who didn’t attack was not a natural fit.”

“Look, this is crunch time,” Rep. Joaquin Castro, who has endorsed Warren, said after Wednesday’s debate. “And Elizabeth Warren is elevating her game.”

In past debates and on the trail, Warren has largely attempted to stay above the fray and pivot back to her own message rather than hit her opponents — in part, an effort to not alienate supporters of her rivals as she positioned herself to be a potential unity candidate. Some Warren allies have also argued that female candidates receive more blowback when they attack than male candidates — making the candidate more cautious.

That approach baffled some allies who felt Warren was softening what made her most compelling: a willingness to call people out even if they’re in her own party. Their quiet frustration grew for months and started trickling out after the loss in New Hampshire.

But with her candidacy in trouble and time running out, Warren let loose.

“RIP fluffy Warren,” said a close ally after last night’s debate. “Elizabeth Warren, the queen of taking on billionaires, CEOs, and Wall Street investors is back — and it must be here to stay.”

And Warren seems to be enjoying herself.

“Last night was a lot of fun and I’ll tell you why,” she said Thursday morning at a canvass kickoff in northern Las Vegas, her voice still straining and hoarse from a cold this week but a smile on her face.

“I have really had it with billionaires, regardless of party, who think that the rules don’t apply to them. Billionaires who think their money buys them something special,” she said with rising fury.

The crowd of several dozen supporters and door-knockers packed into a field office in a strip mall roared their approval.

“It is not enough to decide in the hours before you declare for president that maybe stop and frisk was a bad idea,” she said. Billionaires like Bloomberg threw money at women who complained about past misogynistic comments and “then put a gag in the woman’s mouth,” she added.

Talking to reporters afterward, she also hit Sen. Bernie Sanders for not releasing his full medical records after suffering a heart attack last fall given he pledged to do so — instead releasing several letters from multiple doctors including his cardiologist attesting to his health.

“He had made a promise to release all his medical records and I thought that was what he was going to do,” Warren said. ” Those aren’t medical records.”

Sanders has argued that the letters are essentially medical records and that his fitness is evident on the campaign trail. “Hey, follow me around the campaign trail, three, four, five events today. See how you’re doing compared to me,” he quipped at the debate.

Warren also indicated that she is prepared to stay in this race for a long time, a pledge more likely given her fundraising bounce on the back of Wednesday’s debate.

“I’m not ready to go away,” she told her supporters.