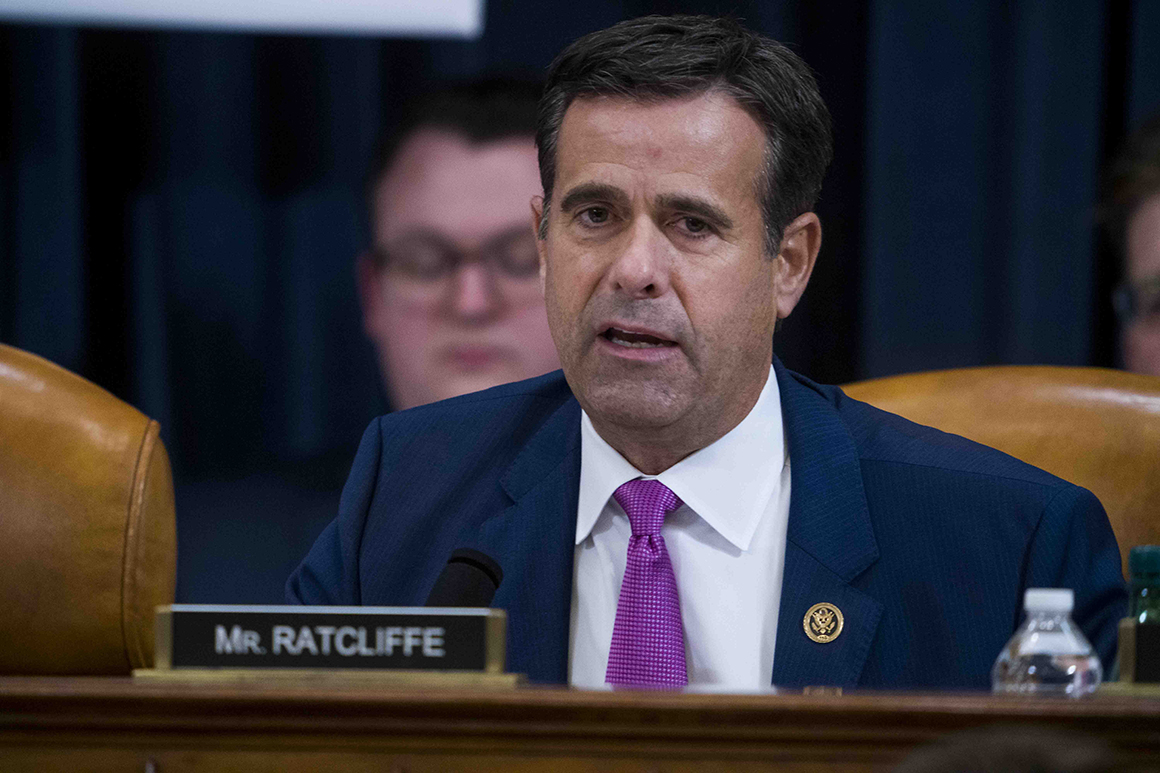 Trump had originally picked Ratcliffe for the job in July, after the Texas Republican had put on an aggressive public display in his grilling of former special counsel Robert Mueller. But despite serving on the House Intelligence and Judiciary committees, Ratcliffe was something of a puzzle to key Republican senators, and he soon withdrew his name amid questions about whether he had inflated his resume.

Ratcliffe got a second nod from Trump this year after serving on the president’s impeachment defense team. And by Thursday, even Senate Democrats were eager to see Ratcliffe succeed acting Intelligence Director Richard Grenell, a Trump ally who has used his temporary perch to push organizational changes to the national security apparatus.

Grenell, who is also the U.S. ambassador to Germany, has also provided Congress with newly declassified documents related to the prosecution of former national security adviser Michael Flynn and the FBI’s Russia investigation. Democrats contend that the GOP is politicizing those documents to attack former President Barack Obama and Vice President Joe Biden.

In contrast, Ratcliffe had vowed at his confirmation hearing to be independent and deliver unvarnished intelligence assessments to Trump, even if he believed it would risk his job.

Senate Minority Leader Chuck Schumer said before the vote that he had asked Ratcliffe earlier this week if he agreed with the intelligence community’s initial January 2017 assessment that Russia had interfered in the last presidential election with the goal of putting Trump in the Oval Office — a finding recently backed the Senate Intelligence Committee.

“He could not confirm it,” Schumer said.

He said he also asked Ratcliffe to brief the congressional “Gang of Eight” every two weeks on election interference and requested that Congress be notified within 72 hours if Russia or another country attempts to interfere in U.S. elections.

“In neither case could he commit,” Schumer said.

After the vote, Virginia Sen. Mark Warner, the top Democrat on the Intelligence Committee, said “nothing would be better than to be proved wrong on” concerns about Ratcliffe’s independence and partisan history.

“But time will tell. With Coats, we made that leap, and he ended up being independent. I hope to see the same from Mr. Ratcliffe,” Warner told POLITICO.

Republican accolades rolled in after the Senate vote.

In a statement, Sen. Marco Rubio (R-Fla.), who was tapped earlier this week to serve as the acting chairman of the Intelligence panel, said it was “critical to have a Senate-confirmed DNI ensuring the wide array of intelligence agencies are sharing information across lines, coordinating capabilities” and furthering U.S. national security goals.

“Director Ratcliffe understands this responsibility, and I am confident that he will fulfill all of the roles assigned to the DNI with integrity,” Rubio added.

Ratcliffe is a “man of character who will bring strength and accountability to the role,” House Minority Leader Kevin McCarthy wrote in a tweet.

Meanwhile, Grenell tweeted: “Congratulations, @RepRatcliffe ! You will be the best DNI ever! #USA”