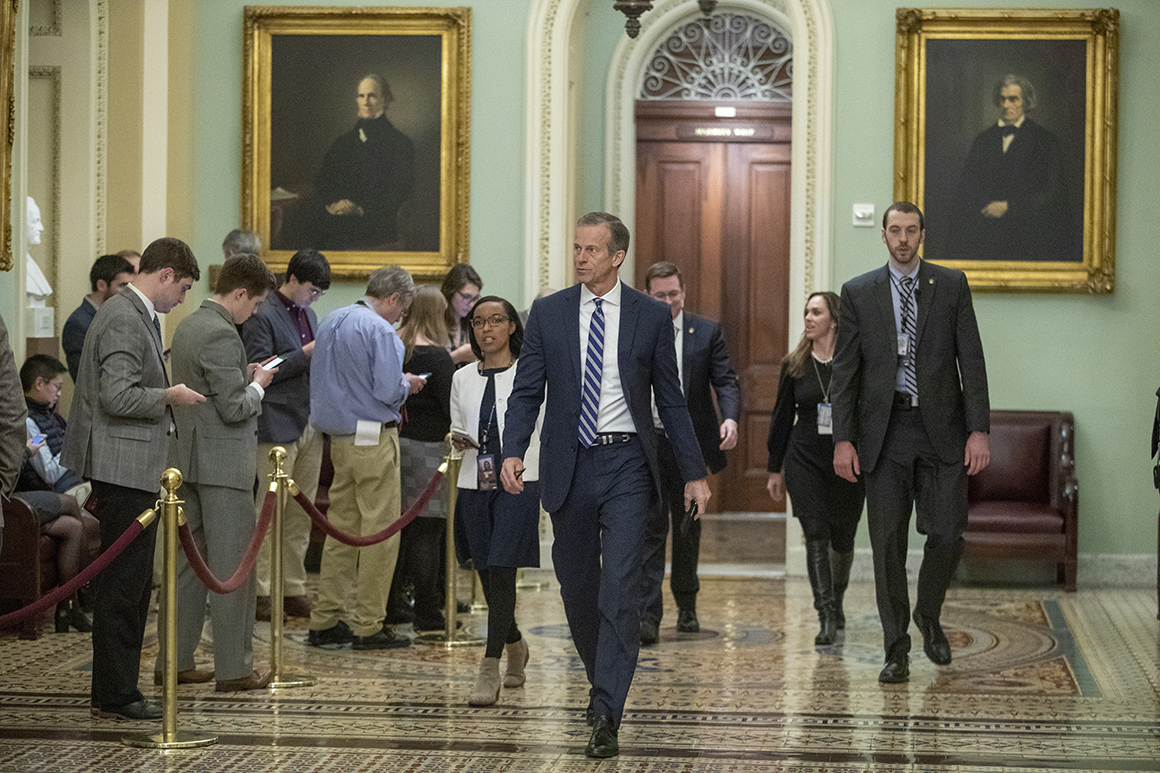 In the closed-door meeting in the Strom Thurmond Room, where Republicans have endured tough internal debates over the years, Senate Majority Leader Mitch McConnell (R-Ky.) told Republicans they were short of the votes to block new witnesses from the trial, according to people briefed on the matter. But the remarks amounted to only an admission that there are several undecided senators, not that the party is on a trajectory to lose the vote.

In fact, Republicans feel increasingly confident about prevailing. In the meeting, critics of hearing from witnesses made a “strong” case against voting for new evidence, according to two attendees. A third attendee who opposes new witnesses said the meeting seemed to solidify the position against new witnesses and documents: “I feel good.”

Still, Republicans privately cautioned that they expect more revelations to follow the New York Times report on former national security adviser John Bolton that seemed to rattle Republicans. The vote on witnesses is expected on Friday after two days of question and answer.

“We’ll make our decision on Friday. We’ve got questions to go through yet,” said Sen. Mike Rounds (R-S.D.).

A wave of panic swept through Republican ranks on Monday after a report that Trump told Bolton in August that almost $400 million in U.S. aid to Ukraine would be restarted only when Ukrainian officials assisted investigations into Joe Biden and his son.

The claims — made in an unpublished book — severely undermined arguments from Trump’s defense team, and GOP leaders and the White House feared the report would cause enough Republicans to break with leadership and vote with the Democrats to call Bolton as a witness, a move that could drag out the proceedings.

But by Tuesday, a “feeling of calm had been restored” to the Republican Conference, claimed GOP senators and aides.

“I think the conference is coming together,” Sen. Richard Shelby (R-Ala.) told reporters as he was leaving the room.

Republicans would need to lose four members of their caucus for Democrats to win their demands to subpoena Bolton. Sens. Susan Collins (R-Maine), Mitt Romney (R-Utah) and Lisa Murkowski (R-Alaska) have all said they’re open to hearing from Bolton. But a fourth vote remains elusive. Republicans hold 53 seats in the Senate and it’s unlikely Chief Justice John Roberts would weigh in to break a tie.

Sen. Lamar Alexander (R-Tenn.), a potential fourth vote, reiterated Tuesday after the caucus meeting that his position has not changed. He hasn’t indicated his position, but Republicans expect him to side with his good friend McConnell.

There was little pushback from the Republicans considering voting for witnesses, according to one of the attendees at the Tuesday afternoon meeting.

Top Republicans are warning that calling Bolton or other witnesses could lead to “an endless cycle” that could drag out the impeachment proceedings for weeks or months, especially if Trump asserts executive privilege to block Bolton’s testimony.

“And our guys are, obviously, going to start wanting to call witnesses on the other side to illuminate their case, and I think that gets us into this endless cycle… and this drags on for weeks and months in the middle of a presidential election where people are already voting.”

There also appears to be little support among GOP leaders and the White House – or Democrats – for a proposal by Sen. Jim Lankford (R-Okla.) and supported by Senate Judiciary Chairman Lindsey Graham (R-S.C.) to review a copy of the Bolton manuscript in a classified session.

“Responding to an unpublished manuscript that maybe some reporters have an idea of maybe what it says — I don’t know what you’d call that. I’d call it inadmissible,” Jay Sekulow, Trump’s attorney, said on the Senate floor.

Senators and aides speculated that Lankford floated the Bolton manuscript proposal to pull support from the push to subpoena him as a witness.

Republicans’ “keep calm and carry on” attitude Tuesday stood in sharp contrast to the day before, when GOP senators were shaken by the Bolton revelations and the idea of a prolonged trial with new witnesses and documents was revived.

But that revival appeared short lived after McConnell privately advised his caucus at a lunch Monday to take a breath and first see how things unfold this week — a mantra GOP senators repeated over and over heading into the chamber Tuesday.

Some Senate Republicans were already using parts of the defense team’s case as cover in the Bolton drama.

Sen. Mike Braun (R-Ind.) said he doesn’t think senators need to see a manuscript of Bolton’s book because the allegations don’t amount to an impeachable offense anyway, citing the arguments made by Alan Dershowitz — a former Harvard law professor and member of the defense team.

“He’s one of the smartest constitutional lawyers in the country and he said and made it clear that that doesn’t even get close to rising to the level of being impeachable,” Braun told reporters.

A number of Senate Republicans offered criticism of Bolton as well, denouncing the longtime conservative figure for undermining Trump at a critical time. They also suggested Bolton was leaking the allegations – which Bolton and his publisher have denied – to help sell his book.

“He’s a very unhappy person who was fired by the president. You have to take it with a grain of salt what he says,” said Sen. Rand Paul (R-Ky.), whose libertarian foreign policy views clash with Bolton’s hawkish stance. “He’s being paid millions of dollars for what he’s saying. He didn’t have anything to say for a month because his book wasn’t finished. Now that his books is finished, he has a lot to say.”

Sarah Ferris and Melanie Zanona contributed to this report.