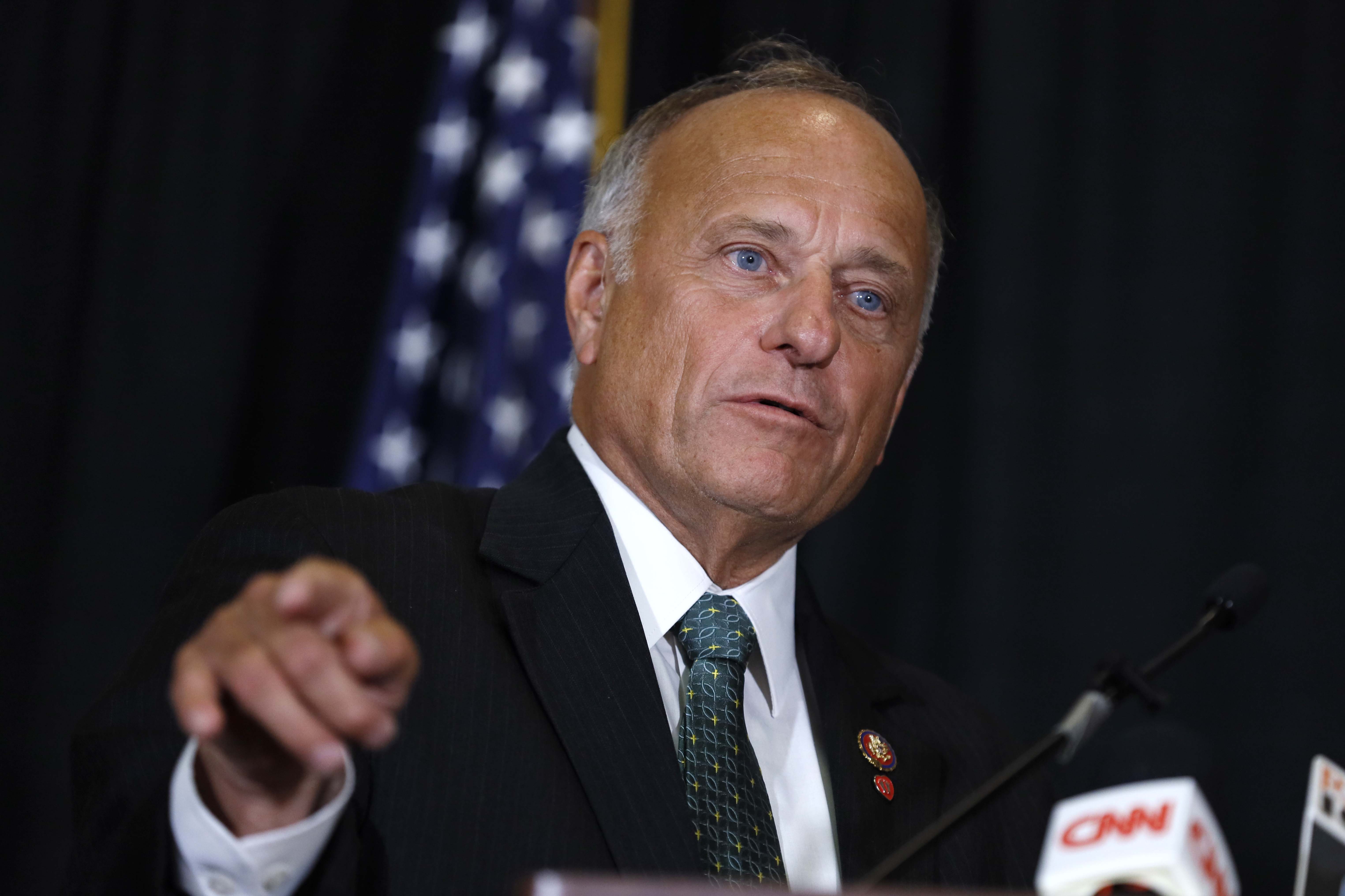 Meanwhile, the widespread protests over police brutality and the continued coronavirus pandemic changed the way people voted — and offered a hint of what could go wrong in November.

Here are POLITICO’s top takeaways from a unique primary night.

After years of answering for Rep. Steve King’s racially insensitive and derogatory rhetoric, House Republicans finally figured out how to give him the boot.

They starved him of cash, deprived him of committee assignments, and plied his challenger with outside support. But to avoid antagonizing his legion of loyal supporters, King’s detractors largely ignored his decades-long list of remarks condoning white supremacists and demeaning immigrants. Instead, they cast him as ineffective and powerless in Washington, unable to achieve results for his constituents.

And on Tuesday night, they watched voters push him out in favor of state Sen. Randy Feenstra.

King’s loss means the northwest Iowa seat will likely remain safely in GOP control. Though President Donald Trump — who didn’t intervene in the primary — carried the district by nearly 30 points in 2016, King won it by just 3 in the midterms. J.D. Scholten, the Democratic opponent who almost beat him, is running again but will have a harder time against Feenstra in such a red district.

King’s loss is also a boon to a party eager to boost its standing with minority voters, increase the diversity in its caucus and project an image of tolerance. Last month, party leaders took the extraordinary step of rescinding support for California GOP congressional candidate Ted Howze, after POLITICO uncovered a trove of derogatory social media posts that denigrated immigrants and Muslims.

Dems get their candidate in Iowa Senate

National Democrats rallied behind Theresa Greenfield from the get-go in Iowa — and helped her emerge through Tuesday’s primary relatively unscathed.

Party leaders view Greenfield as a solid matchup against GOP Sen. Joni Ernst in a race that is expected to be highly competitive and expensive. Both parties have tens of millions booked for TV in the summer and fall and will have outside groups on TV in the coming weeks when the general election starts in earnest.

Greenfield won by a comfortable margin and didn’t come close to missing the threshold that would have forced a party convention. Democrats were also buoyed by record turnout: More than 250,000 votes were cast, an enormous increase from previous competitive primaries in the state.

Greenfield faces some work to unite the party behind her, having won just under half of the primary vote, a slightly lower margin than Ernst won when she emerged from a competitive primary in 2014. Still, the Democratic nominee got some quick help: Mike Franken, the retired Navy admiral who came in second with about one-quarter of the vote, quickly endorsed her candidacy for the fall.

House Republicans are on track to nominate five women in House battlegrounds in Tuesday’s primaries, an encouraging sign for a caucus that is growing increasingly male and white. The 2018 midterm wave left the GOP with only 13 women in the House. Two of them, Reps. Susan Brooks (R-Ind.) and Martha Roby (R-Ala.), are retiring, and several others will have to weather competitive reelections this fall.

The female nominees: Ashley Hinson, a state representative who will take on Rep. Abby Finkenauer (D-Iowa); Victoria Spartz, a state senator who is running for Brooks’ open seat; Yvette Herrell, the 2018 GOP nominee who will get a rematch with Rep. Xochitl Torres Small (D-N.M.); and Mariannette Miller Meeks, a state senator vying for an open seat in southeast Iowa after three previous failed congressional bids.

Meanwhile, businesswoman Lisa Scheller leads her opponent in the GOP primary for Rep. Susan Wild’s (D-Pa.) seat in the Lehigh Valley of Pennsylvania, though The Associated Press has not called the race. Scheller has a compelling personal story: She is a recovering heroin addict who opened a coffee shop that employs others battling addiction.

Republican recruiters are heartened by a surge in female candidates, who had struggled in recent primaries. From the party’s official campaign arm to members like Rep. Elise Stefanik (R-N.Y.) and a number of new outside groups, nominating women candidates has been a renewed priority for the GOP.

But despite Tuesday’s successes, there is no guarantee that will grow their ranks: Democrats are contesting or defending all of these seats.

Plame’s ads were difficult to take your eyes off of. Democratic admaker Mark Putnam put Plame behind the wheel of a car speeding in reverse, and on a dusty obstacle course.

But Plame, despite her celebrity, finished a distant second in Tuesday’s primary for a deep-blue, open congressional seat in northern New Mexico, losing to attorney Teresa Leger Fernandez.

Leger Fernandez had influential backers on her side: The political arms of the Congressional Hispanic Caucus and EMILY’s List both spent money on her candidacy, and she was endorsed by Sen. Elizabeth Warren (D-Mass.) and Rep. Deb Haaland (D-N.M.). Leger Fernandez also held her own in fundraising, bringing in $1.3 million to Plame’s more than $2 million.

Rep. Ben Ray Luján, who is vacating the seat to run for Senate, didn’t endorse a successor. But that wasn’t the case in Northwest Indiana, where the man retiring Rep. Pete Visclosky hand-picked to replace him, Frank Mrvan, won a Democratic primary for another safe seat on the strength of Visclosky’s endorsement.

The coronavirus pandemic presents states with two immense challenges: how to deal with the wave of mail ballots from voters who don’t wish to travel to their polling place in person, and how to accommodate those who do show up and follow the necessary medical precautions.

Some states are handling those trials better than others.

In Pennsylvania, Tuesday’s primary was the first federal election in the state where voters could vote via mail without an excuse. Approximately 1.8 million people had requested an absentee ballot in the state, a drastic increase over previous elections. Still, long lines were reported outside polling places in Democratic-heavy Philadelphia.

The vote count was slow — fewer than 80 percent of precincts were reporting as of 1 a.m. Wednesday — underscoring that, come November, there is the possibility that a close election in the crucial swing state means America may not know who wins the presidency on Nov. 3.

Further down the East Coast, voters in the District of Columbia faced long lines as they contended both with the pandemic and the civil unrest sweeping across the country. Voters at one polling site — there were fewer polling places than normal, and social distancing was enforced inside and outside the building — told POLITICO they waited four hours to cast a vote.

Election administrators were caught flatfooted. “The good news is I’m really, really glad we had so many people interested and willing to vote,” D.C. election board chair Michael Bennett told The Washington Post. “The bad news is everyone decided to vote on the last day that vote centers are open and they decided to do it in person, and that just created an incredible logjam.”