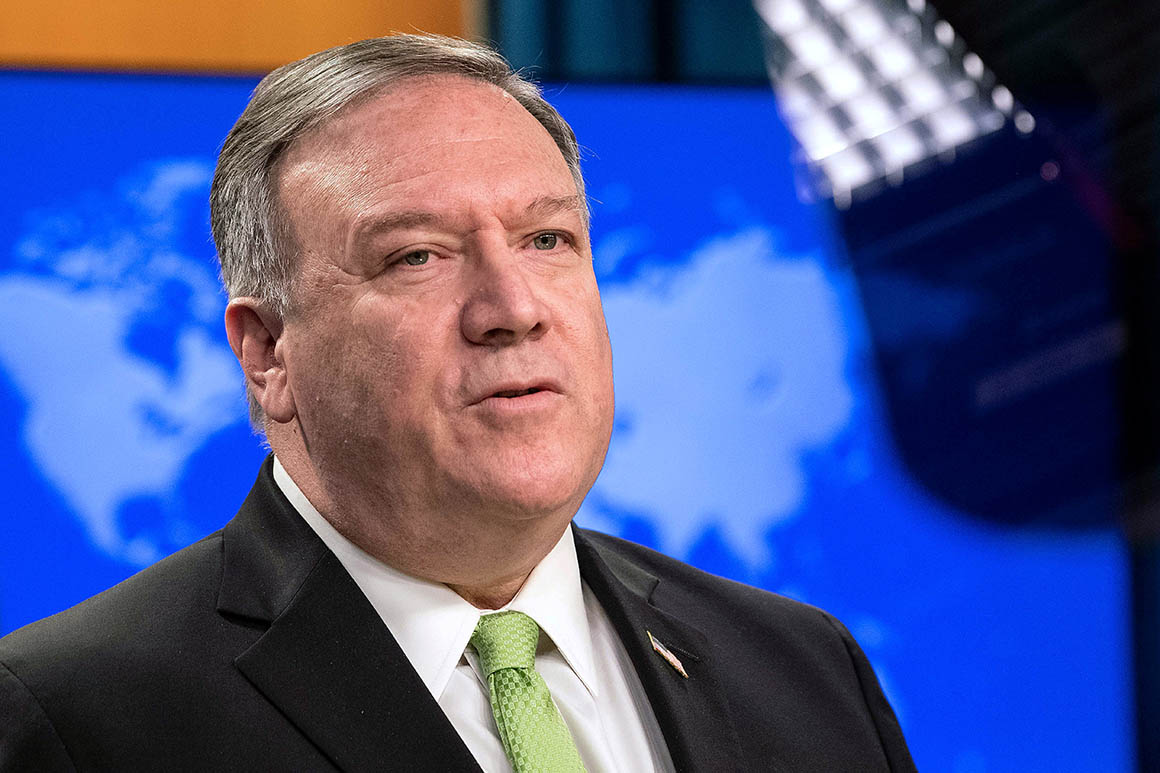 “He wants to talk mainly about China,” a senior EU diplomat said. “We want to talk also about other issues.”

A senior EU official insisted that the partnership with the U.S. is still the EU’s “most important bilateral relationship.”

But with the negative messages arriving from Washington on what seems to be a daily basis, the Europeans are not particularly inclined to give Pompeo what he wants.

Pompeo is one of Trump’s strongest loyalists and defenders, and in addition to China he is expected to discuss the Middle East, the coronavirus pandemic and the situation in Ukraine, EU diplomats said.

In Washington on Friday, one person familiar with the plans told POLITICO: “Pompeo planned to raise issues related to China and Russia.”

Also on the table will be Libya, where tensions peaked on Wednesday as the EU naval operation Irini, enforcing the U.N arms embargo, was prevented by warships of Turkey, a NATO member, from checking a suspect cargo vessel they were escorting off the war-torn country’s coast. That confrontation has raised fears in Brussels of further escalations of tensions in the Mediterranean.

There are few areas of common ground on any of these issues.

Pompeo is making the guest appearance at the meeting of the EU Foreign Affairs Council by videoconference after months in which the pandemic made it impossible for him to travel to Brussels.

In addition to political disagreements, another problem will be choreography.

The 27 foreign ministers will be led by the EU’s top diplomat Josep Borrell. Yet “all ministers want to speak but in an hour and a half you cannot give one minute to each minister to discuss items such as China or Israel,” a second diplomat told POLITICO.

Between the old transatlantic allies, China has become a highly divisive topic.

The U.S has taken an aggressive tone against Beijing that is not shared by most EU member countries. But even within the EU, views diverge quite a lot. Hungary is very close to China but that’s not true when it comes to Nordic countries like Sweden.

Stockholm, at the last meeting of EU foreign affairs ministers, was the only member state to advocate for sanctions against Beijing after it decided to tighten its grip on Hong Kong.

On China, the differences with the U.S. are striking. Pompeo has defined the Chinese Communist party as the “central threat of our times” whereas the EU has a softer tone and Borrell has even denied that Beijing poses any military threat.

The Europeans stress how Washington remains the key ally but also that it is difficult to be on the same page with a friend that seems to have so little interest in fostering friendship.

Pompeo “wants our help on China because they have realized that things went too far, but it’s difficult, very difficult … they keep on kicking us,” the senior diplomat said. Many of the recent U.S decisions are viewed as undermining the EU’s security: including the announcement to reduce U.S troops in Germany, or American reluctance to extend the Start nuclear treaty with Russia, or the decision to withdraw from the Open Skies Treaty that allows Russia and Western nations to conduct observation flights over each other’s territory.

EU diplomats are also worried about decisions that undermine multilateralism, with the most recent being Trump’s imposition of sanctions against the International Criminal Court, which Borrell described on Thursday as “a matter of serious concern.”

The EU has also disparaged Trump’s Middle East peace plan, developed by his son-in-law Jared Kushner, and there is little that the Europeans agree on with the U.S. when it comes to Israel.

Of particular contention is the U.S. backing for the new Israeli government’s plans to annex parts of the West Bank.

From the EU perspective, it can be hard to distinguish between such a move and Russia’s illegal annexation of Crimea for which the Europeans have imposed sanctions. Luxembourg’s Foreign Minister Jean Asselborn said that he sees “no difference at all” with the seizure of the Crimean Peninsula by Russia. “An annexation is an annexation,” he told German weekly Der Spiegel.

Europeans insist that they still have a great deal in common with the Americans, and that Beijing is the beneficiary of any transatlantic tensions.

“In the transatlantic relationship there is a great degree of convergence on many issues but at the same time we have to talk about the things that separate us,” said the senior EU official.

A quick look at what is happening in the airline industry reveals the implications, the official said. “The Americans acted against Airbus because there was supposed to be aid from he European Union” while Brussels was contemplating action against Boeing for the same reason.

But “in the meantime the Chinese are manufacturing wide-body aircraft that they will sell to the rest of the world and that are heavily subsidized,” the official said.