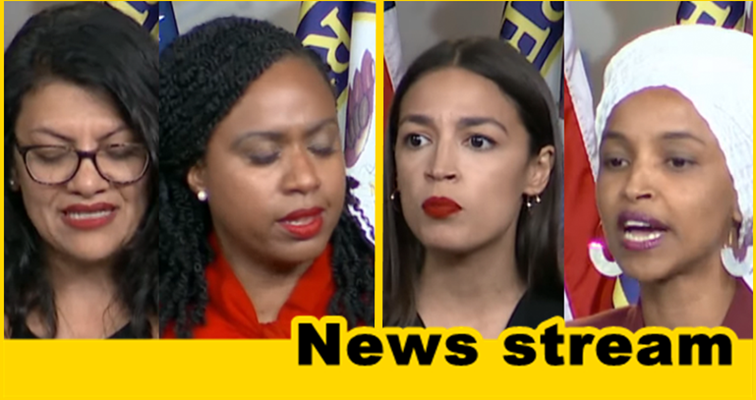 On Thursday, Israeli Prime Minister Benjamin Netanyahu and the Israeli government announced the decision to cancel planned visits from controversial lawmakers Ilhan Omar and Rashida Tlaib, due to their open support of boycott movements against Israel.

The news quickly prompted an eruption of responses from across the political spectrum, as US pundits and commenters raced to share their thoughts on the latest developments.

In the hours that followed the announcement, information continued to come forth, some of which revealed that the freshmen Congresswomen appeared to have listed Palestine, rather than Israel, as their travel destination.

Additional details regarding the co-sponsors of the trip, a group reported to espouse anti-Israel sentiments, added further fuel to the tumultuous issue.

Specifically, Tlaib and Omar’s open support for the Boycott, Divestment, and Sanctions (BDS) movement seemingly violated Israeli law, as the movement has been accused of attempting to essentially eliminate the existence of Israel as a nation.

While the decision sparked sweeping debates across the US, it is not the first time the two lawmakers have found themselves in the spotlight for their views toward Israel, a fact frequently cited by conservative pundits and critics.

It’s official: Israel will bar Congresswomen @RashidaTlaib and @IlhanMN from entering Israel due to "suspected provocations and promotion of BDS” at this time the final decision is been drafted and passed for comments before a press release. https://t.co/YikKaKe97g

Among those critics is President Trump, himself, who has continuously and directly condemned both Congresswomen for their remarks on Israel and Jews in general.

In response to the news, Trump took to social media do slam both Omar and Tlaib, who he said have become “the face of the Democrat Party, and they HATE Israel!”

Earlier in the day, Trump stated that, should Israel allow the two to visit, the decision “would show great weakness,” again asserting that Tlaib and Omar “hate Israel [and] all Jewish people.”

Trump went on to explain his belief that both lawmakers were set in their beliefs, noting, “there is nothing that can be said or done to change their minds,” regarding their views on Israel.

The president speculated on re-election bids for the two, and suggested both Omar and Tlaib may face difficulties in future election, adding, “They are a disgrace!”

Speaking on the issue later, Trump said he “can’t imagine why Israel would let them in,” and pointed to the pair’s lengthy history of questionable remarks, many of which have been deemed to be anti-Semitic.

Representatives Omar and Tlaib are the face of the Democrat Party, and they HATE Israel!

It would show great weakness if Israel allowed Rep. Omar and Rep.Tlaib to visit. They hate Israel & all Jewish people, & there is nothing that can be said or done to change their minds. Minnesota and Michigan will have a hard time putting them back in office. They are a disgrace!

"I can't imagine why Israel would let them in," he said of Ilhan Omar and Rashida Tlaib — the first two Muslim women in Congress — citing past remarks https://t.co/ynry2rpdUQ pic.twitter.com/Z7y5F5ygsj

Prime Minister Netanyahu also used social media to further clarify the decision to block the trip, and explained that Tlaib and Omar were denied entry due to their support for boycott movements against Israel, along with some other interesting information.

Netanyahu continued, explaining that the US Congresswomen had listed Palestine, rather than Israel, as their intended destination: a slight which many interpreted to be the denial of Israel’s right to exist as a nation.

Furthermore, Netanyahu also revealed that Omar and Tlaib “did not request to meet any Israeli officials, either from the government or the opposition,” indicating their desire was not to meet with anyone within the Israeli government.

“The itinerary of the two Congresswomen reveals that the sole purpose of their visit is to harm Israel and increase incitement against it,” said Netanyahu, who went on to point out that the trip was organized and funded by controversial group Miftah.

The Israeli Prime Minister called Miftah “an avid supporter of BDS, and among whose members are those who have expressed support for terrorism against Israel.”

Hanan Ashrawi, the head of Miftah, has been linked to the Palestine Liberation Organization (PLO) and has made several controversial remarks towards Israel.

Ashrawi reportedly stated she helped plan the trip for Omar and Tlaib “to engage with the Palestinian people directly, and to see things on the ground.”

with one exception: Israeli law prohibits the entry into Israel of those who call for and work to impose boycotts on Israel, as do other democracies that prohibit the entry of people who seek to harm the country.

Only a few days ago, we received their itinerary for their visit in Israel, which revealed that they planned a visit whose sole objective is to strengthen the boycott against us and deny Israel’s legitimacy.

Omar, Tlaib, and scores of their Democrat colleagues, including Rep. Alexandria Ocasio-Cortez and several 2020 Democrat presidential challengers, condemned the decision while overwhelmingly using the situation to attack President Trump.

Tlaib called the blockage of the trip “a sign of weakness,” while Omar declared it “an affront.”

Democrat Senator and presidential hopeful Elizabeth Warren said the decision to cancel the trip was “a shameful, unprecedented move,” while pressuring the Israeli government to change its mind.

Bernie Sanders, Warren’s Senate colleague and presidential rival, said the move was “a sign of enormous disrespect,” while Cory Booker took the more direct approach and blamed President Trump in a scathing statement.

It is an affront that Israeli Prime Minister Netanyahu, under pressure from President Trump, would deny entry to representatives of the U.S. government.

MoC are frequently asked to visit Israel to “see things for ourselves.”

But Netanyahu choosing to ban the only 2 Muslim women in Congress from entering tells the US that only *some* Americans are welcome to Israel, not all.

I’m calling this like I see it: bigoted, short sighted and cruel. Any leader committed to advancing democracy would welcome with open arms two democratically elected United States Congresswomen. And every single member of Congress should be calling this out. https://t.co/Ydn3KQLofn

This woman right here is my sity. She deserves to live in peace & with human dignity. I am who I am because of her. The decision by Israel to bar her granddaughter, a U.S. Congresswoman, is a sign of weakness b/c the truth of what is happening to Palestinians is frightening. pic.twitter.com/GGcFLiH9N3

Israel doesn't advance its case as a tolerant democracy or unwavering US ally by barring elected members of Congress from visiting because of their political views. This would be a shameful, unprecedented move. I urge Israel’s government to allow @IlhanMN and @RashidaTlaib entry.

Despite Democrats’ opposition to the decision, both Omar and Tlaib have made no secret of their disdain for Israel.

Omar, specifically, has faced mountainous controversy over a series of remarks which were widely interpreted to be anti-Semitic in nature, including veiled insinuations to tropes that Jewish Americans possessed dual loyalty.

Such comments earned severe bipartisan backlash for Omar, who has also faced further scrutiny for her subsequent apologies, which were largely panned as insincere.