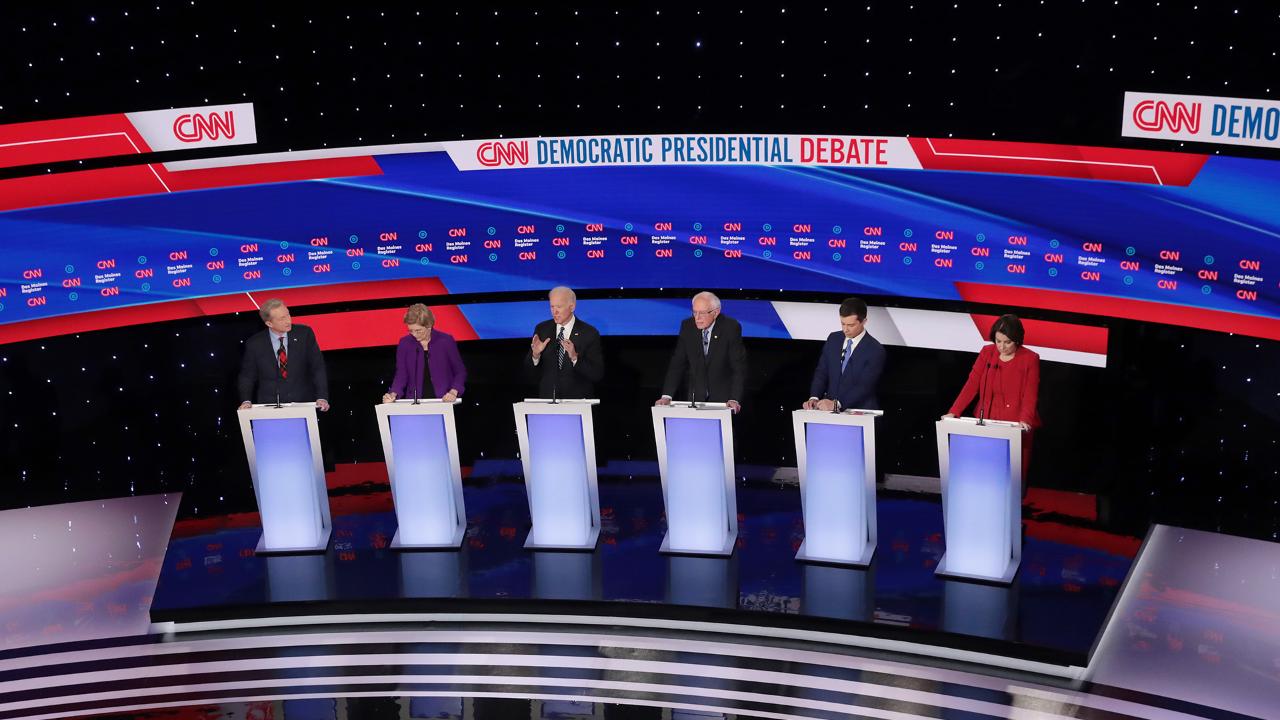 Barrón-López: Biden emerged without taking major damage, again, and by default that makes him one of the winners — though Sanders had some notable exchanges with Biden, drawing contrasts on foreign policy. Buttigieg didn’t have any memorable moments, and that could hurt him as he’s slipped in the polls in Iowa. A strong showing in the first two states is critical for Buttigieg, who has failed to gain traction with black and brown voters.

Otterbein: That question would best be answered by voters! Before the debate, Warren and Sanders’ teams had telegraphed that they wanted to de-escalate — and they achieved that during the debate. As the Sanders campaign beat reporter, I’d say his team will likely feel that he effectively contrasted his record versus Biden’s on the Iraq War, NAFTA, etc. — and he did so at the beginning of the debate, when more viewers typically tune into these things. But he didn’t get the Social Security debate he wanted with Biden — and he needs to do better among older voters, among whom he is running far behind Biden in polls.

Siders: Joe Biden won the night, as a beneficiary of circumstance. The debate opened on foreign policy, an area in which he has a deep well of experience, and Biden exploited it. Even better for Biden? The fight moderators really wanted, between Sanders and Warren — had nothing to do with Biden. The frontrunner left the debate unbruised.

For worst night, let’s call it a tie between Buttigieg and Klobuchar. They did fine. But this was primarily a debate between Biden and Sanders, with some good moments for Warren thrown in. Buttigieg and Klobuchar were on the margins on a night they both needed to be making a statement. It wasn’t a great sign for Buttigieg when, three weeks before the caucuses, he was still getting asked about his dismal levels of support among black voters.

Korecki: Biden really came through tonight. He finally got the debate he wanted, one that delved into foreign policy. The former vice president repeatedly emphasized that he was in the room for big decisions, rattling off the names of world leaders and references to his meetings with them. That depth of experience is key to Biden’s closing argument here to Iowa Democrats: that the United States needs someone who can not only defeat Trump but can immediately handle decisions of grave importance. Meanwhile, I thought Tom Steyer struggled a bit in giving answers that connected.

What was the most surprising moment?

Otterbein: Both Warren and Sanders attempted to take down the heat when asked about CNN’s report — which Sanders denies — that he told Warren a woman couldn’t beat Trump. (Progressive group Democracy for America put out a statement saying that “Elizabeth Warren and Bernie Sanders did everything they needed to do to overcome the media-fueled scuffle of the last 48 hours.”) Then, after Warren said she was the only person on stage to defeat an incumbent Republican in 30 years, Sanders said he had defeated an incumbent Republican in 1990, and there was a slightly awkward, tense back-and-forth.

But then, after the debate, Sanders went for a handshake and Warren didn’t take it, and they appeared to bicker. It was surprising to see these small but revealing moments about the relationship of longtime progressive allies who have known each other since before Warren joined Congress.

Siders: Near the end of the debate, Sanders was asked whether his identity as a democratic socialist would hurt his chances of beating Trump. Predictable question, followed by a predictable answer – a recitation by Sanders of the merits of a $15 minimum wage, free college tuition and a green new deal, among other things.

What was surprising was the answer he could have given then but instead gave earlier on foreign policy — that “I am able to work with Republicans.” Ideologically speaking, Sanders is not a compromiser. But that early remark was no accident. Sanders’ campaign believes that socialist or not, he can draw more support from moderate voters.

Korecki: Warren’s answer when asked about sexism in the Democratic primary. “Look at the men on this stage,” she said. “Collectively, they have lost ten elections. The only people on this stage who have won every single election that they’ve been in are the women. Amy and me.” It was a powerful moment for Warren.

Barrón-López: One notable, though maybe not surprising, element of the debate: The lack of discussion about black and brown voters, and minorities in general. Warren was careful to mention high infant mortality rates in the African American community and discrimination against transgender people. But most of the candidates on the stage did not highlight racial disparities on healthcare or education.

Did we learn something new about the candidates?

Korecki: I think we learned the tensions between Warren and Sanders run deeper than what progressive groups would have us believe. While progressives have pushed for de-escalation and have warned that battling between the two could only help people like Biden, Buttigieg and Klobuchar, the post-debate, Warren-Sanders handshake incident is a window into what’s to come.

Siders: Instead of hammering Sanders regarding that alleged comment on the debate stage, Warren let the moderators do it. Then, she turned a question about the comments at their meeting into an impassioned defense of women and electability — in particular, of the women on the debate stage, who are speaking out more about sexism as voting draws closer.

Barrón-López: Even as the top four try to draw stronger contrasts on the trail, they all are hesitant to go for the jugular on a national debate stage. Every time we think there will be a big blowout there isn’t. That appears to be a result of the last election and viciousness we’ve seen in the past. This primary compared to Hillary Clinton versus Sanders, or Clinton versus Barack Obama, feels much tamer — though there is certainly still time for that to change.

Otterbein: Sanders is at or near the top of the polls in Iowa and New Hampshire, has increasingly been consolidating progressive groups and leaders and is looking to broaden his appeal past that. Tonight he did some things he doesn’t usually do, and purposefully did so at the start of the debate: He argued that he can work across the aisle, bringing up a bill he passed recently that he co-sponsored with Republican Sen. Mike Lee to end U.S. involvement in the Saudi-led war in Yemen — an argument aimed at voters concerned that he is too far left and can’t get his big policy ideas done. (Trump vetoed the bill.) Sanders also reached out to mainstream Democrats by praising the Iran nuclear deal, an implicit praise of the Obama administration.

How will this debate change the Democratic primary?

Siders: I think it was significant for two reasons. First, the lack of a standout performance by any candidate is unlikely to substantially alter the race, and lack of movement this close to the election tilts the landscape further in favor of the four frontrunners.

Second, the debate underscored the candidates’ imperative to work increasingly at the margins to pick up even small numbers of supporters, as Sanders’ answer about working with Republicans demonstrated. One reason for sustained civility in the debate is that candidates are vying to become the second-choice candidate of voters whose first-choice will not get to the 15 percent support threshold to win delegates at Iowa’s caucuses. The debate served as a reminder that the campaign is still in a period of persuasion.

Otterbein: Tonight will lead to more debate within the primary about the media. Tuesday’s debate was by and large substantive, policy-oriented one, including questions about means-testing and universality. But I thought it was a mistake for the moderator to phrase the question about Sanders’ and Warren’s disagreement over their one-on-one private meeting in a way that echoed Warren’s view of the incident. I also thought they should have asked Warren exactly what Sanders’ words were in that meeting. The moderators’ handling of it has left questions lingering.

Korecki: The night was particularly important because it is the final debate before the Iowa caucuses. Iowans — many of whom are still undecided, according to recent polls — surely paid close attention tonight. They’re well aware of the Warren-Sanders tensions that could have some sway over progressives. While Sanders supporters are a loyal lot and are unlikely to be turned off by the divisions, it’s also possible Warren could benefit from some new voters sympathetic to negativity from the Sanders camp.

Barrón-López: I’ll be interested to see the number of viewers CNN clocked for this debate. Is the debate audience growing as voters start to tune in for the first time? Overall, the candidates talked about Trump more and carefully brought their answers back around to current administration in a way they failed to do in previous debates. But I’m skeptical this debate significantly impacts polls in early states, which consistently show the same top four clustered together.