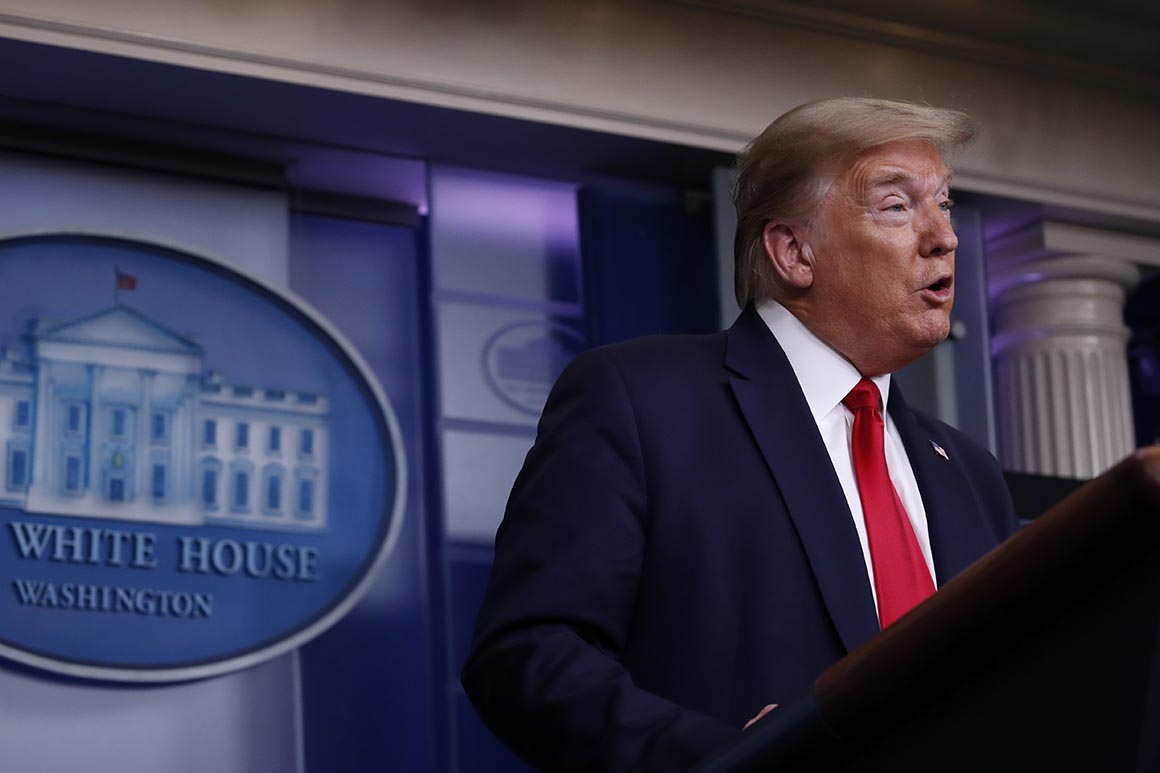 Asked about his tweets at Friday’s White House press briefing and whether those states should lift their stay-at-home orders, Trump said, “No, but elements of what they’ve done are too much. … It’s too tough.”

Earlier in the briefing, Trump said certain states are going to “come online” “sooner rather than later.”

The president’s remarks and social media posts come as some conservative groups have grown increasingly frustrated with the local directives that have slammed the brakes on the U.S. economy, the strength of which had been a key selling point of Trump’s reelection effort.

Trump’s tweets also represent the latest salvo in a rhetorical back-and-forth between governors seeking more robust assistance from his administration and a president loath to accept blame for a federal response that has been widely criticized as inadequate and slow-footed.

Northam was dismissive of Trump’s unexpected broadside at a news conference Friday, telling reporters that he and his staff are “fighting a biological war. I do not have time to involve myself in Twitter wars.”

The tweets also came up near the end of a conference call between Senate Democrats and Vice President Mike Pence regarding national testing for the coronavirus.

When Sen. Tim Kaine of Virginia asked why the president was trying to incite division online, Pence said the administration would continue to work with governors while also communicating with the American people.

But the Democrats were not satisfied. Kaine called the president’s posts disrespectful, and Senate Minority Leader Chuck Schumer of New York pressed the vice president to answer Kaine’s question.

Gov. Jay Inslee of Washington had an even stronger reaction, issuing a lengthy statement condemning Trump’s rhetoric. His tweets “encourage illegal and dangerous acts” and put “millions of people in danger” of contracting the coronavirus, the governor said.

“I hope someday we can look at today’s meltdown as something to be pitied, rather than condemned. But we don’t have that luxury today. There is too much at stake,” Inslee, a Democrat, added.

House Speaker Nancy Pelosi on Friday called Trump’s tweets a “distraction” on MSNBC. “I won’t take the bait,” she added.

The president’s suggestion that Americans should disobey state orders directly contradicts his own past statements acknowledging governors’ authority to announce restrictions to combat the disease’s spread.

Asked about the demonstrations at his coronavirus news briefing Thursday, Trump declined to condemn them, instead noting that “they seem to be protesters that like me” and that the marchers had “been going through it a long time.”

Those remarks bore echos of the president’s refusal to condemn white supremacist marchers who gathered in Charlottesville, Virginia, in 2017 for a “Unite the Right” rally where a counter-protester was killed.

Trump, in the aftermath of that deadly clash, proclaimed there had been “very fine people on both sides” of the rally, an assessment for which he was widely rebuked.

The president’s seeming encouragement of the protesters Friday also flies in the face of federal social-distancing guidance, which is in effect until the end of the month, as well as his administration’s new recommendations advising states to proceed with caution when reopening.

Discussing those guidelines Thursday, Trump acknowledged “every state is very different,” and said that “if they need to remain closed, we will allow them to do that.”

But the president, eager to restart the collapsing economy, was not so deferential earlier this week, and has vacillated wildly when discussing the nature of federal versus state powers as they apply to local stay-at-home orders.

At Friday’s press briefing, Trump said, “I think certain states are going to come online and they’re going to start the early stages of the puzzle that we are putting together. And it’s going to be together sooner rather than later.”

When asked if he was concerned that protester gatherings could spread the coronavirus, Trump said, “These are people expressing their views. … They seem to be very responsible people to me. They’ve been treated a little bit rough.”

On Sunday, Trump instructed governors to prepare their “testing programs & apparatus” to fight the outbreak, tweeting that states should “Be ready” and the federal government “is there to help.”

Trump insisted Monday, however, that he alone had the power to reopen the country — not governors — despite his reluctance to issue a nationwide stay-at-home order or any federally enforceable mitigation measures.

He also argued that the president’s authority is “total,” and said governors “will agree to” his plans for emerging from state shutdowns.

After governors pushed back Tuesday against Trump’s assertion of complete federal power, he suggested the state leaders were involved in a “mutiny” against him, but later conceded he would “be authorizing” their individual reopening plans.

In Texas, where far-right protesters demanded action Thursday at the state Capitol building in Austin, Gov. Greg Abbott outlined the state’s strategy for reopening the economy.

Abbott, a Republican, has sought to walk a tightrope between appeasing conservatives in the state who say lockdowns have been an overreaction and public health officials warning of the virus’ spread; he refused to call an order “shelter-in-place” even though it was effectively that.

The governor attempted to restrike that balance again with Friday’s order, which included plans to reopen only a narrow slice of the state.

He said stores could try “retail to-go,” state parks would reopen but with heavy restrictions and that health care providers could restart some surgeries and diagnostic testing, though he said abortions were still banned in the state.

Abbott also announced that schools and universities would remain closed through the end of the academic year and the state’s lockdown orders would remain in place for now.

Renuka Rayasam and Burgess Everett contributed to this report.