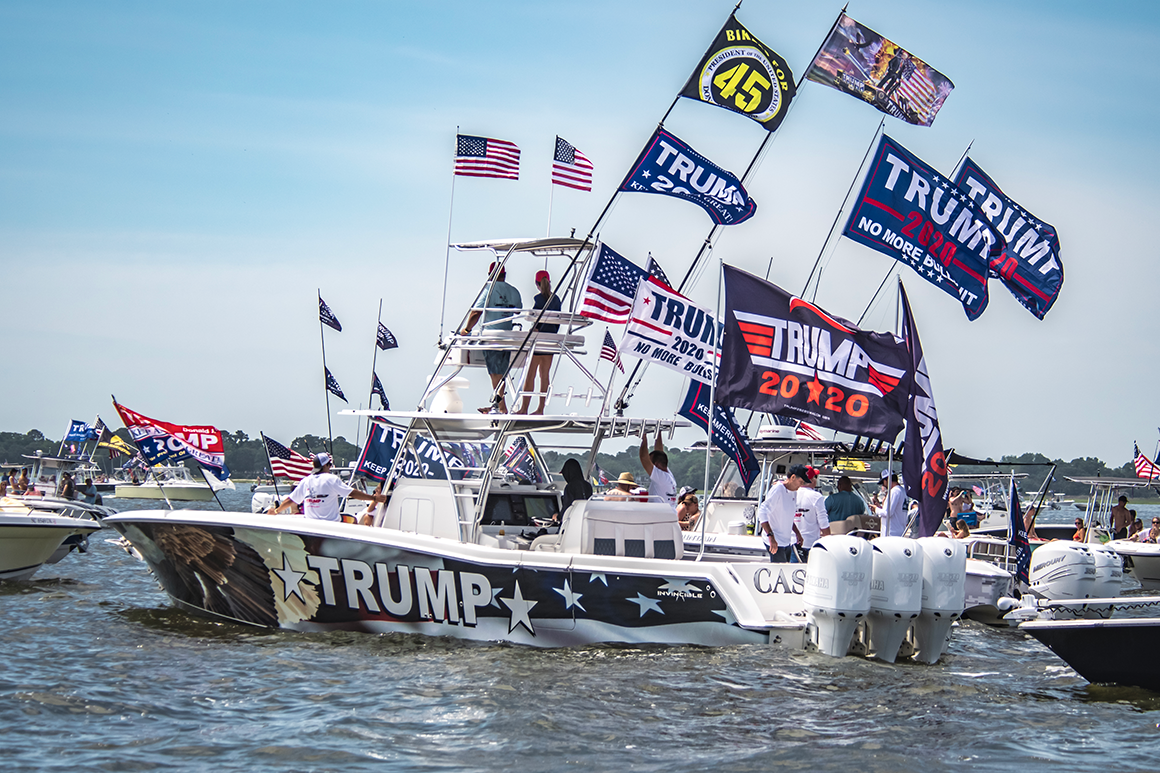 “The boat parades are essentially recreating Trump rallies, but with social distancing built in,” said John Sellek, a Michigan Republican consultant, adding that the free spirit of recreational boating jibes with the president’s messaging.

“I can see what the Trump campaign sees,” he said. “Look at the union, working-class voter in Michigan, whose goal is to have a boat, like a lot of people. Those folks are out there in force boating and fishing and having a great time as much as they can, and they’re the ones who crossed over and voted for Trump in 2016. So these boat rallies and parades make a lot of sense.”

Michigan has the nation’s sixth-highest rate of boat ownership, according to the most recent state-by-state data compiled by the National Marine Manufacturers Association, an industry trade group.

As the weather warmed in Michigan and residents got their boats water-ready, the politics of boating were already making headlines.

Gov. Gretchen Whitmer, a potential running mate for Democrat Joe Biden, was thrown on the defensive after her husband asked a Northern Michigan dock company to get his boat in the water in time for Memorial Day weekend even as Whitmer had cautioned residents against rushing to the region, according to the Detroit News. The governor then apologized for her husband’s “failed attempt at humor.”

Yet she doesn’t let people even breath in Michigan. A very bad double standard! https://t.co/A60YxvWFGv

Earlier in the week, Trump was on social media basking in the adoration of his Florida voters showing their support on the water.

“Thank you. We love our boaters!” Trump said Sunday via Twitter in response to a video from a flag-waving flotilla off St. Petersburg, a crucial swing county in the ultimate swing state.

It was the president’s third tweet this month about the flotillas, which began May 3 in Florida, the president’s newly declared home state. They’ve been called “Trump Boat Parades” or “Trumptillas,” their captains and crews nicknamed “MAGA boaters.”

In Florida, Trump has a net approval rating among boat owners of about 18 percentage points — at least six times higher than his statewide net approval number — according to the campaign’s voter profile models, which consist of 3,000 different public and consumer data points.

Florida has the highest number of registered boats in the nation, nearing 1 million, according to state data. Wisconsin has the nation’s fourth-highest rate of boat ownership, and the Trump campaign said his net approval is 10 points there among boaters — and 11 points among boaters in Michigan.

The boater data shared by the campaign underscores its ability to finely slice and model the electorate. But the MAGA boaters aren’t so much of a persuadable group of swing voters as a sign of the enthusiasm of Trump’s base, and their flotillas a symbol of a campaign that prizes spectacle and energy.

Just up the Florida coast in Palm Beach County from the president’s Mar-a-Lago club, Jupiter resident Carlos Gavidia came up with the idea of the first flotilla as a result of a common Florida spat: a squabble with his property-owners’ association.

Gavidia said he had left his Trump flag flying from his 42-foot boat docked on the canal behind his house after his first day out on the water following his recovery from coronavirus. But the association has a rule against flag-flying and, in protest of having to take it down, he decided to spend $7,000 to adorn his boat from bow to stern with a colorful painting-like wrap depicting an American eagle and the word “Trump,” which he then named his boat. He also decided to hold a pro-Trump boat parade and advertised it on Facebook.

At least 1,500 boats showed up and formed a daisy chain along the Intracoastal Waterway that stretched more than 8 miles from Jupiter Inlet to Palm Beach Inlet, according to Gavidia and Tom McDermott, owner of Boat Pix, a company that photographs vessels from helicopters. Gavidia says he thinks 2,500 boats were involved

Two weeks later, the wife of Republican state Rep. Cord Byrd organized a flotilla on the Intracoastal near Jacksonville, earning Trump’s attention and ensuing media coverage. Boat owners from California to the Carolinas did the same last weekend.

Thank you very much to our beautiful “boaters.” I will never let you down! pic.twitter.com/Ot5Ffnjj9G

“They’ve definitely replaced the rallies,” said Gavidia, whose boat was featured in a video highlighted on Twitter by Trump. “It’s a great way to get thousands of people all screaming ‘Trump!’”

On June 14, Trump’s birthday, Gavidia plans another flotilla that will head down the Intracoastal to Mar-a-Lago. He said 3,300 people have already signed up on Facebook. Six days later, another flotilla of 1,500 boats is planned farther north on the Space Coast, near the middle of the state. Along the Panhandle on the other end of Florida, boaters are organizing a July 5 flotilla from Pensacola to Orange Beach, Alabama.

In Florida, the flotillas are traveling to some of the most densely packed areas of the state, earning news coverage in crucial media markets. Last weekend’s boat parades in Naples racked up favorable stories in the Republican strongholds that comprise the Fort Myers media market. The rally farther up the coast picked up free media in the state’s largest market, Tampa Bay, which anchors the west end of the swing voter-rich Interstate 4 corridor.

A recent boat parade in Arizona showed that Trump supporters in land-locked states are also getting in on the action.

“Who knew boaters would be a key demo?” chuckled Kirk Adams, an Arizona Republican consultant. “That campaign has really gotten in the data sets it can target, which you’ve seen over the last several cycles.”

Arizona has more than 123,000 registered boat owners who enjoy Lake Havasu, Lake Powell, Theodore Roosevelt Lake and the Salt River. As a newly-minted swing state where the presidential contest figures to be more competitive than ever before, Adams noted, the race in Arizona could be won at the margins “and who knows? Maybe the race could come down to a few thousand votes or maybe even boaters.”

That said, Adams noted, he’s not convinced any sophisticated data operation or shows of enthusiasm can save Trump if he loses the suburbs there, where polls show Biden is ahead in a state that has voted for a Democratic presidential candidate just once since 1952.

In a statement from spokesman TJ Ducklo, Biden’s campaign said that “Trump’s botched and erratic response to this virus — which has left over 100,000 dead and over 40 million out of work — is why his approval rating is underwater. Shallow claims of manufactured enthusiasm that are unsupported by polling data won’t be enough to distract from this truth: families are suffering with Donald Trump at the helm, and this country is looking forward to pitching him overboard so they can get the leadership they deserve from Joe Biden.”

But Trump campaign spokesman Rick Gorka said the president is “building on the organic energy that is out there for President Trump. Our field team is making sure activists have the skills, tools and swag to wave the flag. Literally and figuratively…The energy is the key, we have it, they don’t. It’ll hurt Democrats from top to bottom.”