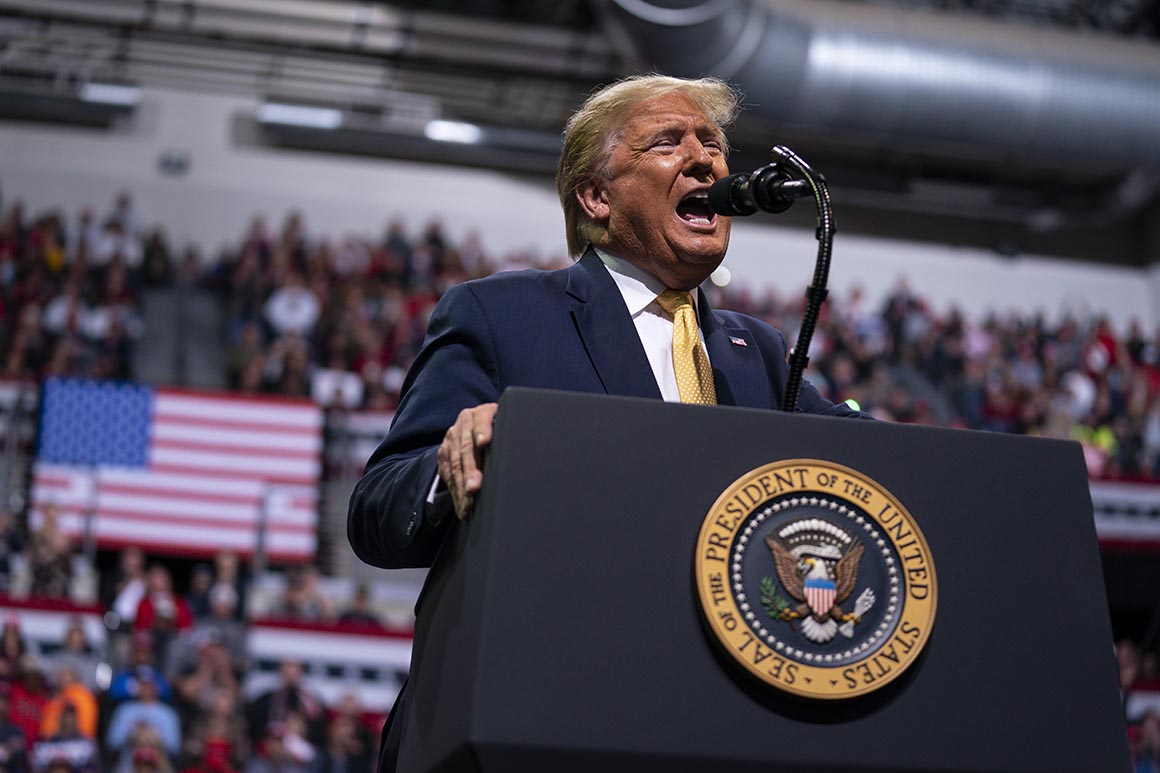 In Wednesday’s debate in Las Vegas — Bloomberg’s first appearance in a 2020 Democratic debate — candidate after candidate went after the New York City former mayor’s record of stop-and-frisk policing policies, accused him of buying his way onto the debate stage and brought up accusations linked to his company related to sexual harassment and his alleged sexist comments.

Trump also mocked the heated tension between Klobuchar and South Bend, Ind., former Mayor Pete Buttigieg, who are both vying for moderate votes and heartland supporters. At one point during the debate, Buttigieg needled Klobuchar for forgetting Mexican President Andrés Manuel López Obrador’s name during an interview, to which Klobuchar responded by asking whether Buttigieg thought she was “dumb.”

“How about Klobuchar, did you see her? She choked,” Trump said, also gagging while clutching his necktie. “She said, ‘Are you accusing me of being dumb?’ Who would make a statement like that? … That was the end of her campaign in my book. You don’t say that, even if it’s true.”

The rally was part of a three-night, three-rally tour of Western states, finishing in Nevada on Friday, just before the state’s Democratic caucuses.

Trump also focused on the media for a lengthy segment of the rally, accusing journalists and pollsters of fabricating information to harm him. He spent a significant amount of time poking at Fox News for what he said was unfair coverage, offering exceptions for a handful of the network’s opinion shows. “All their high-rated shows are the shows that like Trump,” he said.

Trump contrasted his 2016 performance with Wednesday’s debate, claiming he had won every debate in which he had participated. He complained that the media unfairly failed to praise his performances, calling journalists “among the most dishonest people” who put him and his supporters at “enough of a disadvantage.”

The president also covered disparate topics such as environmental activist Greta Thunberg becoming Time Magazine’s person of the year to the South Korean film “Parasite” being named for Best Picture at the Oscars.

“We’ve got enough problems with South Korea with trade. On top of that, we give them best movie of the year? Was it good, I don’t know!” he said.

Trump also used the rally to praise Sen. Cory Gardner of Colorado for being loyal to him during the Senate impeachment trial by voting for his acquittal. Gardner is up for reelection in this year’s election.