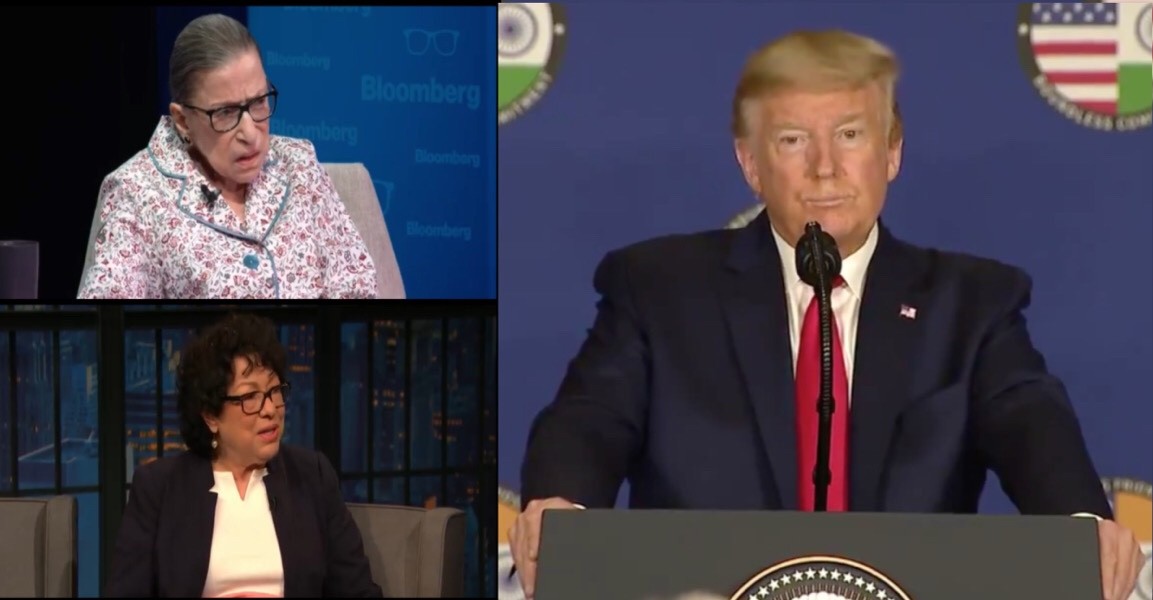 Late Monday night, President Trump took to Twitter calling on Supreme Court justices Sonia Sotomayor and Ruth Bader Ginsburg to recuse themselves from any cases involving his administration. He also responded to a question about his tweet during a press conference in India on Tuesday.

The rebuke from the President comes after Sotomayer, in a scathing dissent, accused conservative colleagues of showing favor to the Trump administration.

The President’s tweet on Monday night cited Fox News‘ Laura Ingraham on the “The Ingraham Angle,” and he accused Justice Sotomayor of attempting to shame other justices to vote with her.

“’Sotomayor accuses GOP appointed Justices of being biased in favor of Trump’ @IngrahamAngle @FoxNews,” President Trump wrote on Twitter. “This is a terrible thing to say. Trying to ‘shame’ some into voting her way? She never criticized Justice Ginsberg when she called me a ‘faker’.

“Both should recuse themselves on all Trump, or Trump-related, matters!” the Commander in Chief declared. “While ‘elections have consequences’, I only ask for fairness, especially when it comes to decisions made by the United States Supreme Court!”

Sotomayor, who was nominated by President Obama in 2009, issued the blistering dissent Friday after a ruling in the case of Wolf v. Cook County. The case dealt with the Trump administration’s expansion of situations where the government can deny visas to non-citizens looking to enter the U.S., reported Fox News. (Continued Below)

During a press conference in India on Tuesday, the president was asked about his tweets pertaining to Supreme Court justices Sotomayor and Ginsburg, to which he doubled down.

“I always thought that frankly, Justice Ginsburg should do it, because she went wild during the campaign when I was running. I don’t know who she was for, perhaps she was for Hillary Clinton if you can believe it. But she said some things that were obviously very inappropriate. She later sort of apologized. I wouldn’t say it was an apology,” President Trump told John Roberts of Fox News, referring to when Ginsburg told CNN at the time, that Trump has “no consistency about him. He says whatever comes to his head at the moment.”

“And then, Justice Sotomayor said yesterday, you know very well what she said yesterday, it was a big story. And I just don’t know how they cannot recuse themselves for anything having to do with Trump or Trump-related. The right thing to do, is now that a Supreme Court Justice is a different standard, but at the same time, I think it’s a higher standard, in a certain sense,” he continued. (Video Below)

“So they’ll have to decide what to do. But her statement was so inappropriate. When you’re a Justice of the Supreme Court– it’s almost as if what she’s trying to do is take the people that do feel a different way and get them to vote the way that she would like them to vote. I just thought it was so inappropriate– Such a terrible statement from a Supreme Court Justice,” President Trump expressed.

“Let’s see what happens, we have things– whether or not they recuse themselves both. I mean look, Justice Ginsburg during my campaign, I protested at the time. She apologized in a very minor form. And what Justice Sotomayor said yesterday, was really highly inappropriate. And everybody agrees to that, virtually everybody. I’ve seen papers on it. People cannot believe that she said it,” he added.

President Trump on Supreme Court Justices Sotomayor and Ginsburg: “I just don’t know how they cannot recuse themselves for anything having to do with Trump or Trump related.” #SCOTUS

….on all Trump, or Trump related, matters! While “elections have consequences”, I only ask for fairness, especially when it comes to decisions made by the United States Supreme Court!

(Related: Trump Fires Back After Acosta Claims: ‘Our Record On Delivering The Truth Is A Lot Better Than Yours Sometimes’: “You Ought To Be Ashamed Of Yourself”)