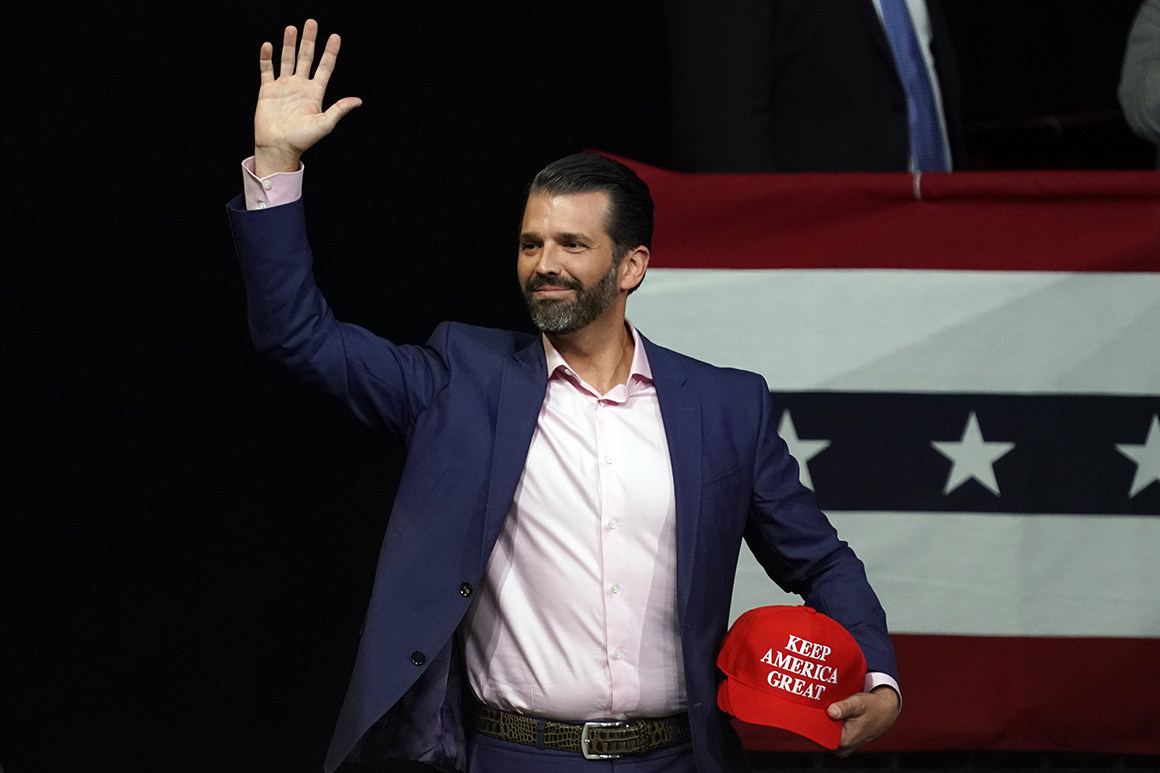 “So it’s an oppressive politically correct culture and climate on campus and people are just tired of it, and when they see someone like Trump Jr. coming to campus and disrupting that and being a counter force of that, it’s refreshing and makes people excited.”

The emerging dynamics of the 2020 race threaten to escalate the campus culture wars, pitting the young activist left — particularly college students energized behind Bernie Sanders and others clamoring for free college and health care — against a conservative base railing against the “leftist socialist.”

The dynamic is already on display at the CPAC 2020 conference in the Washington area, where Kirk spoke Thursday about what activists could do to fight the “cartel of colleges.”

“Stop giving money to your alma mater. Stop it. Cut them off,” Kirk said. “They do not need your money. These universities are indoctrinating the next generation around ideas of open borders and Marxism. And where Senator Sanders gets his base is a limitless supply of millions and millions of students who are entering our university system, and they’re being turned into activists.”

He also called on the packed room to become involved in local school board elections, where they could influence what would be written in textbooks, and to stop sending their children to four-year colleges, especially so-called elite colleges. “I would not send anyone that I care about to those schools unless you want to play Russian roulette with their values.”

The longstanding grievance that conservative students have against their left-leaning peers has been the subject of most college appearances by Kirk and Don Jr., who is positioning himself as a bridge between his father and young activists on the right in the 2020 cycle — and generating speculation about his own political future.

Several students who attended Don Jr. events on college campuses boiled his appeal down to a few factors: his in-person humor, his bluntness and his talents as an internet memelord — blasting scathing GIFs and images of his enemies into social media, and writing shocking tweets on the verge of bad taste, all in the name of owning socialist libs and weak cucks.

“I think he’s hilarious,” said Parker Marlow, a University of Georgia student who helped organize his October 2018 visit. “One of the reasons why I like to follow him is because he posts memes all the time and they’re hilarious.” (Don Jr. has embraced this reputation, with his Instagram bio describing himself as a “General in the Meme Wars.”)

“Whether or not I find everything he says to be funny is one thing,” said Kevin Lorusso, a TPUSA campus coordinator who organized Don Jr.’s appearance at Colorado State University in October. “But I think the way that he tries at least to shed light on some of the more serious, uh, full part of the way the culture has gone.” He cited Kevin Hart’s cancellation as the host of the 2018 Oscars for previous offensive comments as one example.

But even if Don Jr. wasn’t Kevin Hart-level funny, Lorusso said Don Jr. had the stature and resources to avoid the boycotts and reputational damage that Hart and his equally-”cancelled” ilk experienced. “You have a world of cancel culture? Well he’s someone that can’t really be canceled.”

And where Don Jr. goes, interest in the culture wars follows.

Anna Kelchner, the president of Liberty University’s TPUSA chapter, remembered the moment Kirk and Don Jr. mentioned that a new chapter of the group was formed. “‘We were getting messages on Turning Point accounts from over — I’m not even exaggerating — over 75 students saying ‘I had no idea that was a Turning Point chapter until Charlie announced it today! How do I get involved?’”

That response had never happened whenever another conservative political figure came to campus and spoke at the highly conservative Liberty, she added. Though visiting the university’s biweekly convocation has become a virtual requirement for anyone with a rising career on the right, Kelchner said that they’d often come in with the expectation that everyone on Liberty’s campus were plugged-in activists, talking right over the average student’s head. “People come to our campus and think that we’re like Congressmen, at times,” she said.

With Don Jr., however, the audience — all students forced into mandatory attendance — was more amenable, because he went through the trouble of actually explaining political points and his father’s presidency, peppered with jokes about life as a trouble-making college student. “He doesn’t just talk about it like everybody already knows.”

The idea that Don Jr. is bringing a cultural revolution to the youth still generates skepticism among people tracking the space.

Nationwide, conservative students make up about 30 percent of college campuses, while self-identified liberals make up 70 percent, said Nancy Thomas, the director of the Institute for Democracy and Higher Education at Tufts University.

“I’m not seeing any big wave of support for him or even for Donald Trump on college campuses,” she said. “Certainly on some of the ones that are more conservative or located in more conservative parts of the country, it will happen. But even then, you know, it’s 40% Republican, 40% Democrat and 20% somewhere in the middle.”

The origin of pro-Trump college fervor, she suggested, came from an amplified sense of grievance that their ideas were not being accepted — an assertion she said was false, citing a study she and her colleagues did on college campus free speech before the 2016 election.

Thomas said she had observed a rise in watchdog groups, think tanks and other outside forces attempting to weaponize academia in ideological warfare, and that faculty members she‘d spoken to were now terrified of being candid in classrooms.

People close to both Don Jr. and Kirk said it was unlikely that Don would appear at more TPUSA events during the upcoming general election, but should he decide to visit a college campus this cycle, he’s got a small but vocal fan base already waiting.

Marlow said that a year later, people still talked about Don Jr.’s appearance at UGA. “I was actually talking to a guy just about a week ago. He’s like, ‘Yeah, I was there. I was there before I knew what Turning Point was.’”

And even if he doesn’t visit a single campus again, his fan base is already focused on the specter of socialism and leftism on campus and beyond.

Lorusso, who once was a self-described “Bernie bro,” credited the ideas and the people he met through Turning Point with his conversion. “Once you realize that the only way that laws that can exist and a government can exist is the threat of violence, you realize, well, I don’t really want that. And it was this realization that the hardest socialism is compulsion, is coercion.”

Others were less philosophical, conflating socialism with all things left-wing on campus, particularly the protests. “A lot of people on the left know these people are effective. So they want to shut it down,” said Semanko, citing the protests that Don Jr. and other highly controversial speakers faced when they visited a TPUSA event.

Don Jr. was not coming back to campus, Semanko added, but “I bet in this current climate, if he or somebody else were to come back … you would see extreme backlash from the left.”