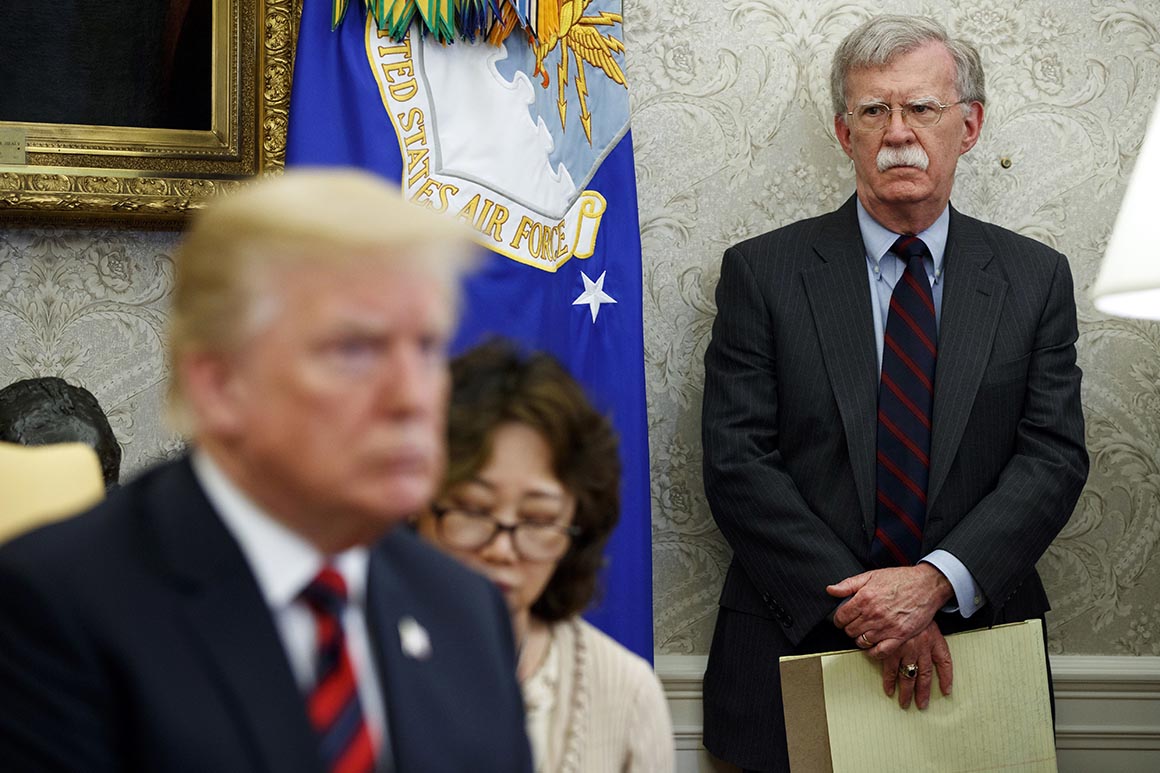 Current and former officials tried to play up that “independent streak” on Monday.

Former White House press secretary Sarah Sanders shared an excerpt from her coming tell-all book, “Speaking for Myself,” that paints Bolton as “drunk on power,” and said that “often Bolton acted like he was the president, pushing an agenda contrary to President Trump’s.”

“As he did on many of our foreign trips, Bolton had a separate agenda and often arrived and departed on a different plane because he didn’t want to travel on Air Force One with the President and his team,” Sanders wrote. “Bolton apparently felt too important to travel with the rest of us.”

One senior administration official noted Bolton’s decision to not travel with the president on Air Force One may have cost him valuable face time with the president, but said it was just in his style to be “incredibly independent.”

The administration’s argument against Bolton has evolved in recent days as Bolton has gone on a media blitz, promoting his book in a primetime special with ABC News, as well as in interviews with USA Today, NPR and others. While at first discrediting Bolton, White House officials have latched on to intelligence community assessments that the book contained information that jeopardized the safety of the American people.

The director of National Intelligence, John Ratcliffe, wrote in a statement — noted by White House press secretary Kayleigh McEnany in a briefing on Monday — that “unauthorized disclosures of classified information damage our national security and threaten the sources and methods the Intelligence Community relies upon to safeguard the American people.”

The evaluations differed from an initial conclusion by the National Security Council that the book was free of classified information, and Bolton has defended himself against accusations that he put profit ahead of security.

For months the manuscript for Bolton’s book was scrutinized line-by-line by the White House for classified material. As the Justice Department acknowledged, an administration official signed off on the book. But then the review process — which Bolton alleged turned political — was started again. Bolton sees the push by the administration to block his book as an attempt to help the president save face from embarrassing and salacious details about his leadership capacity and decision making skills before the election.

“He didn’t want the book to be published before the election. After it, different story. That tells you this is not about national security. The national security equities don’t change depending on who wins the election. This is about suppressing an unfavorable account of his presidency,” Bolton told ABC News.

And in turn, Bolton has been attacked by Democrats for not testifying about his findings when he had the chance during impeachment hearings on Capitol Hill.

“It’s a blood sport. When someone decides to break ranks from their boss, suddenly they’re the worst person in the world and they’re horrible to work with,” Snodgrass said. “That’s politics 101.”

The concerns about the sensitive nature have gone beyond U.S. circles. On Monday, Chung Eui-yong, a top national security adviser for President Moon Jae-in of South Korea, said in a statement, “It does not reflect accurate facts and also distorts a large portion of facts considerably.”

“Unilaterally publishing consultations made based on mutual trust violates the basic principles of diplomacy and could severely damage future negotiations,” Eui-yong said.

“I was concerned there are far too many pieces of confidential information on Trump administration policy-making in this book, but it hadn’t occurred to me there might be information on our agreements with other countries,” said Fred Fleitz, a former CIA analyst who served as Bolton’s chief of staff when he was national security adviser.

“It’s just one of many reasons why a senior U.S. official should never publish a book like this before the president leaves office,” he added. “It betrays confidence, it discourages the president to confide in his trusted leaders and now we see it could actually affect our relations with other countries.”

On the eve of the book’s release, Trump and his allies leaned on character assassinations. Trump tweeted that Bolton is “grossly incompetent and a liar.” Former chief of staff Mick Mulvaney called Bolton’s television interview “a classless display.”

“I imagine former chief of staffs, former national security advisers, former cabinet members from all administrations cringed to watch the sort of betrayal of confidence last night from John Bolton,” Mulvaney said during an appearance on “Fox & Friends” on Monday. “It was really a classless display.”

The White House, the Republican National Committee and political allies are expected to continue the attacks even after the book is released. The Republican National Committee’s rapid-response director, Steve Guest, wrote in an email: “John Bolton is a liar and a warmonger and as Bolton’s self-aggrandizing book and TV interviews show, Bolton is only out for himself, not America’s national security.”

Just hours before the book’s release, the attacks and warnings about classified information appeared to have only boosted Bolton’s book. It is currently No. 1 on Amazon’s bestseller list.