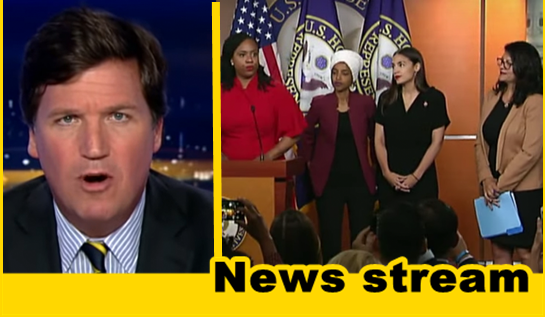 “Look at these congresswomen, and by the way he never listed out who he was talking about we can guess who a few of them are, but look at the anti-Semitic remarks that have been made by Ilhan Omar and Rashid Tlaib and AOC,” McEnany said on Fox News Radio’s  “Todd Starnes Show.”

“Comparing our border facilities to concentration camps.  And Ilhan Omar pleading for an ISIS member to get a lesser sentence. He was planning to travel over to Syria and in that document, she just completely ripped apart the United States. Time after time we see these anti-American remarks.”

Tucker Carlson went further in his latest segment as to how the left may be committing self sabotage by placing “the squad” front and center.

By singling out these four members of Congress, the president also highlighted their prominence in the Democratic Party.

Six months ago, these were just four young lefties in a sea of 235 House Democrats. Now, they are the Democratic Party. If you don’t believe it, you must have missed the press conference all the channels took live on Monday. The congresswomen said a lot which will help define the Democratic Party going forward. For example, Ayanna Pressley of Massachusetts, explaining that the president is not really the president?

“The remarks from the occupant of our White House — I will always refer to him as the ‘occupant’ as he is only occupying space, and does not embody the grace, the empathy, the compassion, the integrity that that office requires and that the American people deserve,” she said.

So, if you’re not compassionate, according to this member of Congress, you are illegitimate. “This president is illegitimate,” she says because the 2016 election itself was illegitimate. It didn’t go the way Democrats wanted, so, of course, it must have been rigged, three months after the Mueller report showed otherwise.

“This president has been credibly accused of committing multiple crimes, including colluding with a foreign government to interfere with our election,” Omar said.

It went on like this, just days after a terror attack on a facility, driven by very irresponsible rhetoric. The group repeated the insinuation that border detention facilities that were created by the Obama administration are, in fact, a brand-new atrocity created out of nothing by the Trump people, and they are a crime against humanity.

Rep. Ilhan Omar, D-Minn.: Keeping children in cages and having human beings drinking out of toilets.

Rep. Alexandria Ocasio-Cortez, D-N.Y.: He can’t look a child in the face, and he can’t look all Americans in the face and justify why this country is throwing them in cages.

It was a big day. Earlier in the day, new party leader Ilhan Oman was asked about a recent terrorist attack committed by the left and she pointedly refused to condemn it. It’s not hard. But she didn’t do it. Why didn’t she?

Because progressives love it. They love this whole thing. They think moments like that are helping their cause. They’re thrilled when Ilhan Omar and the rest give the finger to their many political enemies.