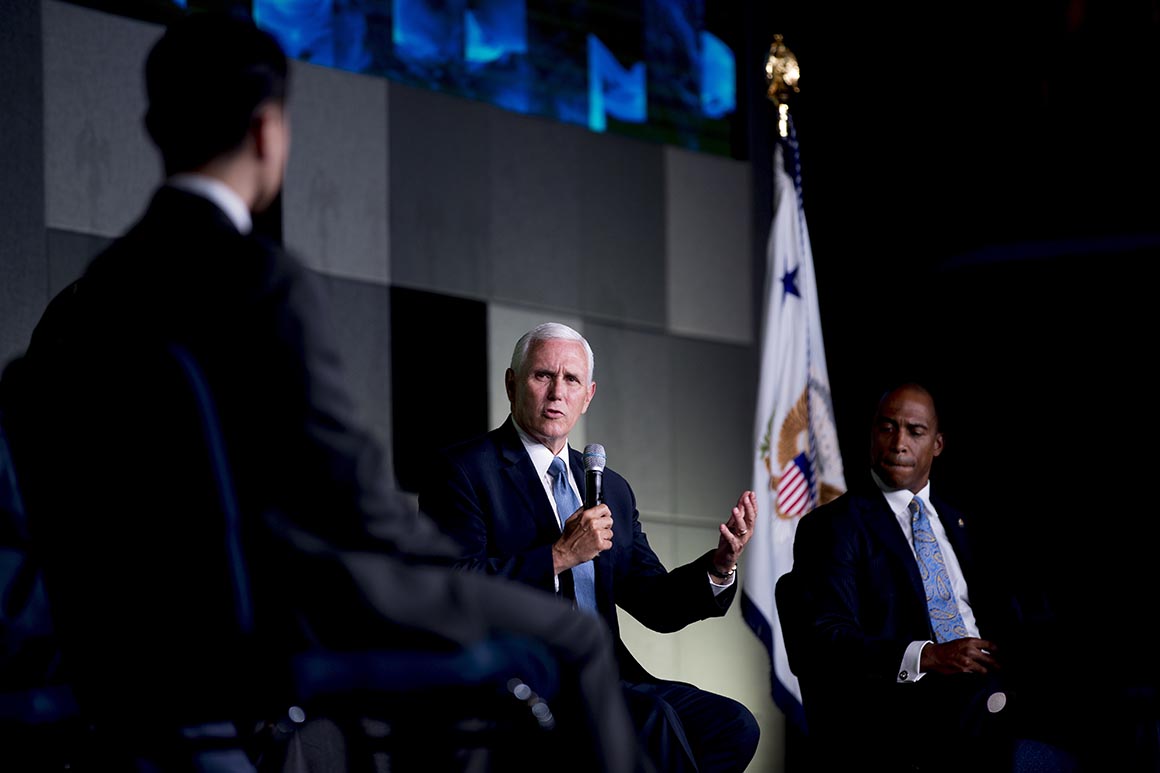 Four years later, after the police killing of George Floyd, a 46-year-old black man whose death sparked worldwide demonstrations, Pence is quietly changing his message to fit a new moment without appearing to be in conflict with his boss. As President Donald Trump and other senior administration officials dispute the very notion of systemic racism within local and federal law enforcement agencies, Pence has acknowledged that a nationwide conversation is needed on those very topics. The adjustment in Pence’s approach comes as he works to neutralize Trump’s antagonistic outbursts — including tweets comparing protesters to “thugs” and taunting Democratic leaders over scenes of chaos in their states — and chart his own course as a compassionate conservative who could expand the MAGA base if he ran on his own in 2024.

To be sure, Pence has echoed his boss’s calls for strict enforcement against rioting and looting each time he’s publicly weighed in on the civil unrest. But his own comments — which he often pairs with sympathetic language about the purpose of the protests — lie in stark contrast to Trump’s standalone “LAW AND ORDER!” tweets.

Asked if Pence stood by his previous comments about institutional racism, spokesman Devin O’Malley said in an email that the vice president’s remarks at a law enforcement roundtable on Monday — where Pence said he was grateful to have “a conversation about how we can improve” — were the best summary of “where he is on this issue currently.”

“We have always been in the business of making a more perfect union, and we are going to be about that now,” Pence said during the event.

But the White House meeting with state attorneys general, police union representatives and local sheriffs also underscored the delicate line Pence must straddle as he attempts to inject a more conciliatory tone into the administration’s response to anti-racism protests without revealing a dissonance with Trump’s “law and order” positioning.

“This situation is no different from an ordinary day for Mike Pence,” said a former senior administration official, noting the vice president has often embodied the role of presidential translator — ranging from his involvement in diplomatic kerfuffles, where he’s been dispatched to reassure allies or spin away the president’s problematic comments, to his interjection at a news conference last Friday, where Trump was supposed to take a victory lap following the better-than-expected May jobs report.

“Today is a great day for America. The American comeback begins today,” Pence had said, jumping in after his boss spent nearly an hour riffing on an assortment of topics, including his eyebrow-raising assertion that George Floyd was having “a great day.”

In a listening session with business owners and black pastors following the news conference on Friday, Pence offered a refined version of Trump’s Rose Garden message that economic stability is the end-all solution to racial injustice. The vice president sat quietly as one participant critiqued the president’s tone and another demanded more training for law enforcement to prevent police officers from using excessive or deadly force.

At one point, Pence acknowledged that the economy alone cannot deliver racial justice: “It will not be enough for us to just heal our economy. We’ve got to heal that which divides.”

Pence allies said one of his defining characteristics — something that sets him apart from his defiant boss and could benefit the administration in this historic moment of social unrest — is his ability to adapt to the times and modify his posture as needed.

One African American pastor who worked closely with Pence during his time as Indiana governor said he disagreed with his previous dismissal about systemic racism in law enforcement, but would feel comfortable having a frank discussion with the vice president about race relations because he’s “always been very open to conversations.”

“This has brought up old wounds and pains that many of us who are middle-aged and black have experienced in this country and with law enforcement. I’m hoping we don’t let this moment go by without any significant changes,” said Rev. Charles Harrison, adding that he and Pence “are good enough friends that I can share my honest perspective with him.”

For the duration of the 2016 election, Pence clung to a pro-police stance that aligned with the tough-on-crime platform he and Trump ran on — repeatedly casting his uncle, a career cop in Chicago, as a “hero” in stump speeches and applauding his running mate’s support of the “Blue Lives Matter” movement.

But the killing of Floyd has also called attention to differences between the president’s strategy and that of his deputy. As Trump threatened to unleash “vicious dogs” against protesters and thanked himself in multiple third-person tweets for mobilizing the National Guard and delivering a “really big jobs report,” Pence met privately with prominent black conservatives to solicit their thoughts on how the administration should proceed.

And when Trump convened a group of top officials to walk with him to St. John’s Episcopal Church last week, so he could wave a Bible in front of the historic house of worship that had been partly burned during riots, Pence waited back at the White House.

His absence prompted questions among White House officials and outside allies who figured Trump’s deeply religious vice president would have wanted to join him outside the church, or accompanied him and the first lady on their visit to the Saint John Paul II National Shrine the following day.

“It’s Pence being Pence,” said one senior administration official, who claimed the vice president declined to join Trump at St. John’s out of deference. “It was a presidential moment, a moment for him to be out there alone.”

The hard-to-ignore differences between Trump’s hard-line comments, and Pence’s quiet outreach to affected communities, is in some ways emblematic of the challenge Republicans face as they wrestle with Trump’s incendiary rhetoric on race and the simultaneous desire by some party figures to build a big-tent coalition.

On the same day Sen. Mitt Romney (R-Utah) joined a faith-based protest against police brutality in the streets of Washington, Trump took to Twitter to call former Secretary of State Colin Powell, a longtime Republican and the first African American to be appointed to the position, “a real stiff” who was “so bad for the USA.” Trump also bashed Romney late Sunday night in a tweet sarcastically praising the Utah senator’s participation in the march.