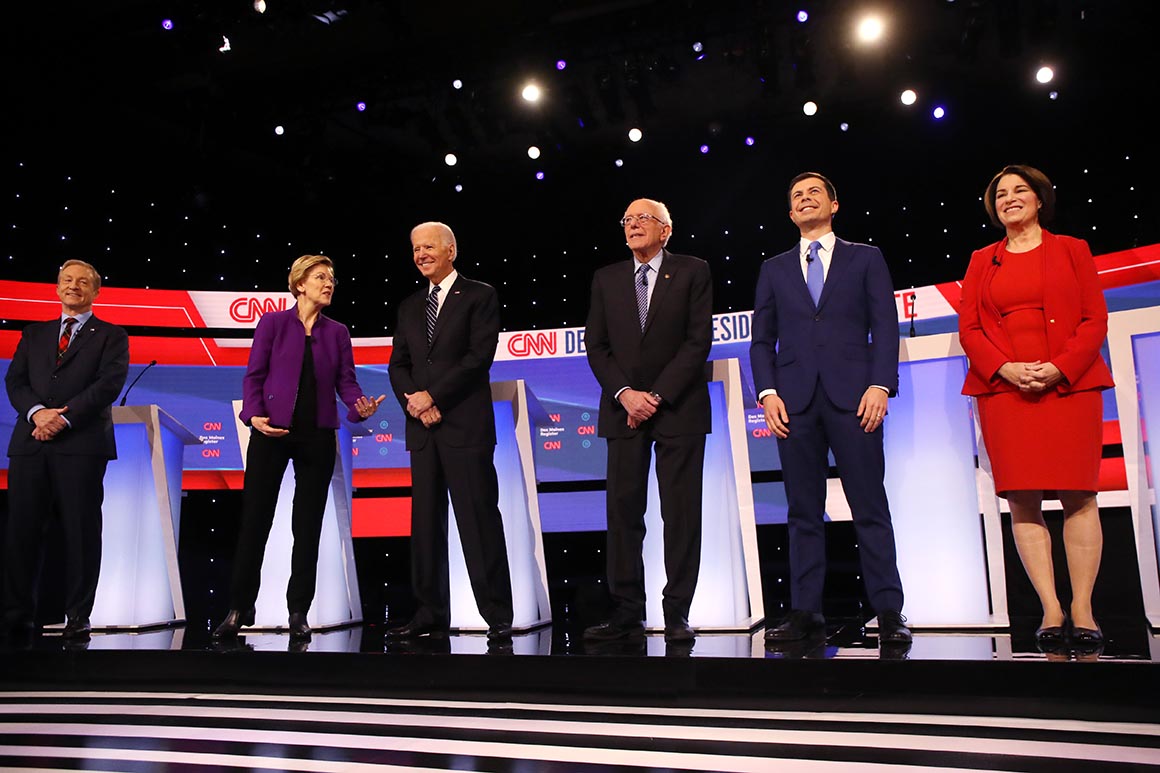 As expected, for the first time in a debate this cycle, foreign policy featured prominently. Presidents have far more latitude over foreign policy — where Congress can be virtually ignored — than any other area of responsibility, and yet it has been given little attention. That’s partly for political reasons. Polls show Biden, the former globe-trotting vice president and Senate Foreign Relations Committee chairman, with an enormous advantage on the issue, and most of his opponents don’t see discussing it as beneficial to them.

CNN’s Wolf Blitzer did an admirable job teasing out some of the subtle differences that have crystallized among Democrats in the post-Obama world. The party is now divided into two broad camps. The first, represented by Biden, is the Clinton and Obama era establishment that is deeply chastened by the failed military interventions of the last two decades, but that is insistent on preventing the debacle in Iraq and endless war in Afghanistan from turning Democrats into isolationists. The other camp, represented by Sanders, is defined by its opposition to the Iraq War, and sometimes struggles to articulate a foreign policy that extends beyond its righteousness about getting the war right.

When Sanders was asked why he was “the best prepared person on this stage to be commander in chief,” the entirety of his answer was about his opposition to the Iraq War 17 years ago and his opposition to the intervention in Yemen last year. The strength of the anti-interventionist wing of the party was made especially clear when both Sanders and Tom Steyer pointed out that they believe that even the post-9/11 vote to authorize the use of force in Afghanistan — a previously unassailable vote — to defeat al Qaeda was in hindsight a mistake. (Nobody stepped in to counter that argument.)

Biden, Amy Klobuchar, and Pete Buttigieg all argued that some troops need to remain in Iraq and Afghanistan, while Sanders and Warren insisted all “combat troops” should be brought home. (In response to Warren, Biden tried to draw a distinction between combat troops and “special forces” but Warren didn’t clarify whether she agreed there was a difference.) Buttigieg proposed placing some limits on the presidency by demanding that any authorization for the use of force include a three-year sunset. Warren conceded that she would use force without congressional approval if the United States faced an “imminent threat,” but quickly added “that we need an authorization for the use of military force before we take this nation into combat.” While there are now two broad camps in the Democratic Party, most of the energy and thinking is about how to place restraints on the next president’s ability to use force.

Trade policy is enormously important to Iowa’s economy and a conversation about the United States-Mexico-Canada Agreement revealed one of the few new divides to open up between Sanders and Warren on the left. Warren had been silent about the Trump-negotiated deal that is now before Congress. Most Democrats in Washington support it and the AFL-CIO, which has opposed most major trade deals since the 1990s, came out in favor of it. Warren quietly announced her support for the deal in a local TV interview in Boston over the holidays, ensuring her support wouldn’t create much news. Sanders, who has proudly opposed most trade deals in his three decades in Congress, refused to jump on the bandwagon. “The answer is we can do much better than a Trump-led trade deal,” Sanders said, adding that because the deal does not stop all outsourcing he can’t support it and that his position is endorsed by some environmental groups.

Warren has worked to position herself as a unity candidate that can bridge the divide between Bidenism and Bernieism. The differences with Biden are clear, so she has had to find subtle ways to distinguish herself from Sanders. Her support for USMCA is one signal that unlike Sanders, Warren is more attuned to how important it is for a party leader to adopt party-wide positions. Sanders has always been and remains more comfortable as a lonely voice of opposition as long as there are pockets of activist resistance on his side to which he can point.

As in every debate, there was a lengthy domestic policy discussion anchored by health care. The moderators on Tuesday night zeroed in on one of the broad philosophical disagreements between the candidates that rarely gets spelled out: to what extent should the government subsidize healthcare, college, and childcare for all Americans?

The use of means testing — requiring those with higher incomes to contribute more for government services — varies across the proposals of the candidates. Sanders is the most consistent, arguing for the largest welfare state across all those categories with the least amount of means testing. His argument is that for government programs to enjoy wide popularity they need to be available to all Americans regardless of income. Buttigieg and Klobuchar, who, for instance, frequently attack free college plans as subsidizing tuition for millionaires, are on the other side of the spectrum.

Warren, who is closer to Sanders, seemed tripped up by one question that cut to the heart of the means testing debate: “Your education plan includes tuition-free public college for all. You impose an income limit for free child care. Why do plans cover everyone for public college but not child care and early learning?” When asked tough questions, politicians often answer in a way that seems like they are challenging the premise when they are actually confirming it. Warren’s response was a classic of the genre. “Actually my plan is universal child care for everyone,” she said. “It has some people adding a small payment.” Of course, the people “adding a small payment” are those with higher incomes. In other words, means testing.

Finally, this was a debate that proved how much diversity matters. When black and brown and Asian voices are absent from the stage, the issues important to those communities don’t get much attention. It’s true that the dearth of discussion on race was partly because there weren’t many questions on those issues, but in previous debates when that happened candidates such as Julian Castro and Cory Booker and Kamala Harris helped steer the conversation into those areas.

And their presence on the stage also meant that those issues were more likely to be raised. If Castro, who made immigration a signature issue, is in the debate, then it’s more likely moderators will ask about an issue that is important to many Latino voters. If Booker and Harris, who frequently discussed racial justice issues, are present then a debate about criminal justice reform or reparations is far more likely to happen. (Warren noted in her closing remarks that many issues did not get discussed, including black infant mortality and climate change’s effects on minority communities. In a tweet, former Massachusetts governor Deval Patrick criticized the absence of any debate about racial issues.)

The presence of Klobuchar and Warren, two white women, proves the point about the importance of how who is on stage affects what gets discussed: there was a lively discussion about sexism and whether a female candidate would be at a disadvantage against Donald Trump. That conversation, which was sparked by a CNN report Monday that in a private conversation in 2018 Sanders told Warren that a woman couldn’t beat Trump, could have produced a nasty back and forth between the two candidates. Instead, partly because both candidates decided there was no percentage in pressing the fight, produced an elevated discussion about the history of the Democratic Party as an engine of overcoming voter prejudice, with, as Warren pointed out, John F. Kennedy overcoming the belief that a Catholic could never be elected president and Obama proving an African American could win.

And that debate also produced the line of the night. “Look at the men on this stage,” Warren said, pointing to her colleagues. “Collectively, they have lost 10 elections. The only people on this stage who have won every single election that they’ve been in are the women. Amy and me.”