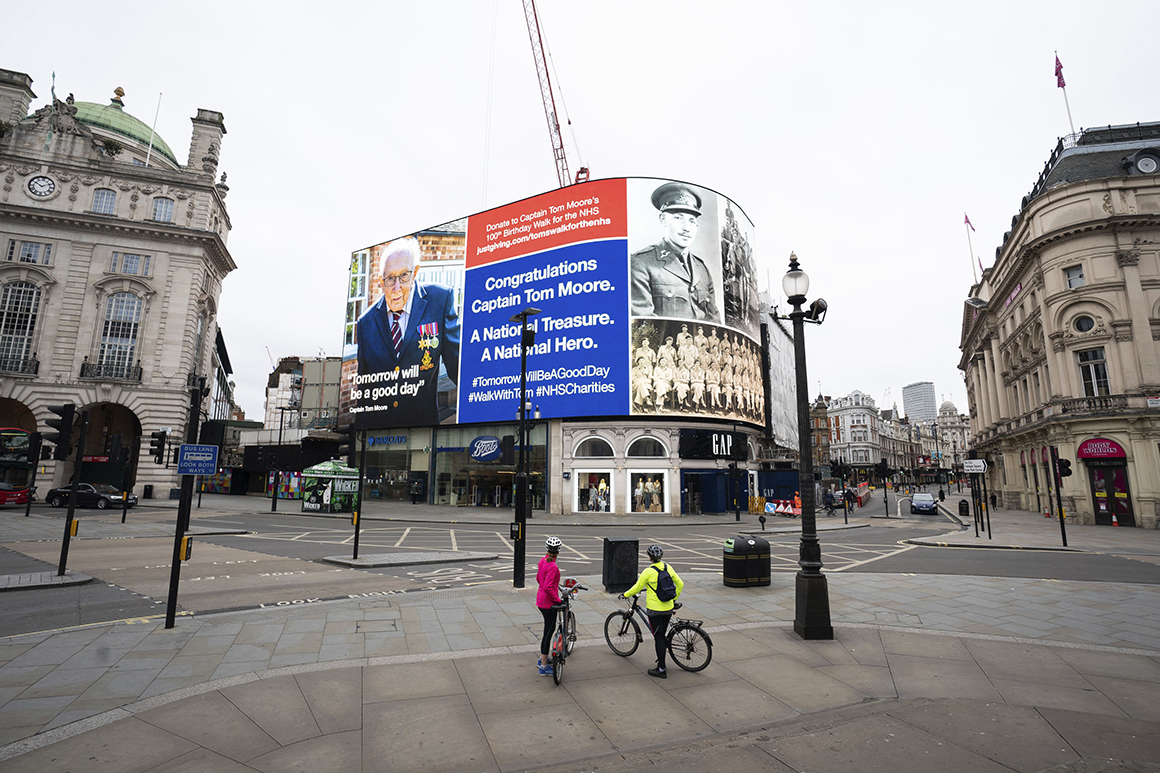 “We were not on track” to keep global warming to under 2 degrees Celsius, said Rachel Kyte, a former senior World Bank and U.N. sustainability adviser who now leads The Fletcher School at Tufts University. In fact, with global climate, biodiversity and oceans negotiations delayed until 2021, the world is actually falling further off the course it set in 2015.

Jahan Chowdhury, country engagement director for the environmental group NDC Partnership, estimates that for every month of delay in climate negotiations and financing, governments will have to work another three months trying to finalize their Paris agreement plan.

“If we don’t use this stimulus, then time’s up,” Kyte said.

America’s political leaders are fundamentally divided on climate change. And the coronavirus pandemic has reset the priorities of even some of the country’s greenest politicians.

And in low-lying Miami Beach, officials have had to put a hold on some of their plans to raise hundreds of miles of roads, install pumps to reduce strain on its stormwater system and deploy “green” infrastructure like parks with absorbent materials to bolster defenses against rising seas and flooding.

“When the dust settles, there will be a culling nationwide of a lot of these projects,” Miami Beach Mayor Dan Gelber said. Altogether, 2,100 cities are preparing for budget shortfalls and layoffs according to a National League of Cities and U.S. Conference of Mayors survey.

The Trump administration, meanwhile, has plowed ahead with a federal rollback for vehicle fuel economy standards. Even officials who are adamantly opposed to the move, like Inslee, are too stretched to respond thoroughly, Schuler said.

Some local officials remain hopeful the coronavirus will instill a new sense of urgency among U.S. leaders. “The lesson to take here is inequality and unpreparedness make crises that much more catastrophic — and we know the climate crisis is coming, so we don’t have any excuse,” New York City Councilman Brad Lander said.

Europe talks big, but can it deliver?

The EU and Britain both have strong incentives to go green in 2020, but are struggling to match their words with action.

EU officials say the lesson they are taking from the 2008 financial crisis is that they need to put recovery funds toward jobs-heavy sectors that advance the bloc’s manufacturing base and clean energy technologies. Ursula von der Leyen, who heads the European Commission, is “doubling down” on green growth, and EU leaders are discussing a road map for a green and digital “comprehensive recovery plan” at a Thursday summit.

Lobbyists, however, are now seizing on the coronavirus pandemic to try to hold off some of the bloc’s proposals. From the car industry to plastics producers to airlines, many European industries are urging lawmakers to introduce “regulatory relief” from the EU’s climate standards and enforcement.

Some companies are even trying to have it both ways. Renault and energy giant ENGIE, signed on to a letter from BusinessEurope, Europe’s largest business lobby, asking for delays to green regulations, while also signing up to a “Green Recovery Alliance”.

Where the EU executive is already moving quickly, it’s doing so without new environmental requirements. The European Commission distributed $41 billion through its Coronavirus Response Investment Initiative under existing environmental rules. Hungary, the biggest beneficiary of the rescue package, saw carbon emissions rise the past five years on record, from 2014 to 2018.

Among Europe’s national leaders, only Czech Prime Minister Andrej Babiš — who called March 17 for the bloc to abandon its Green Deal — and France’s Emmanuel Macron, backed by his government’s independent High Council for Climate, have been vocal on the role climate concerns should play in stimulus funding.

Britain is now in the global spotlight as it prepares to host the U.N.’s delayed COP26 climate negotiations sometime in 2021, as well as the G-7 presidency. The U.K can’t afford to assume leadership of those forums while at the same time pursuing an “un-green stimulus” argued Richard Black, director at Energy & Climate Intelligence Unit, a green NGO.

Recent statements from the Conservative government have green groups hopeful U.K. leaders recognize that. Alok Sharma, the U.K. Business Secretary who represents Britain in the U.N. climate negotiations, told a climate conference Wednesday that the country will stick to a promise to double its climate financing aid to developing countries, to around $14 billion a year starting in 2021.

Progress elsewhere in Europe has been mixed. Austria went ahead with the closure of the country’s last coal power plant April 17. And Italian Environment Minister Sergio Costa said last Friday he wants a “green restart,” including new penalties against environmental crimes and compulsory climate education. The cash-strapped country isn’t putting any money behind those ideas, however.

Teresa Ribera, the deputy prime minister in charge of the climate law, is instead now responsible for managing Spain’s lockdown restrictions. And she is battling to keep climate a priority among her G-20 colleagues, whom she says are “mainly focused on how to get a predictable and stable price for oil.”

All eyes now turn to German Chancellor Angela Merkel, who has been bogged down in debates about who should pay for economic recovery across Europe. Merkel is scheduled to deliver a widely anticipated climate speech April 28.

Canada’s Liberal minority government, led by Prime Minister Justin Trudeau, is making a point of sticking to its climate plans — such as an increase of the federal carbon tax April 1 — despite calls from opposition politicians and industry groups to hit pause. “Just because we’re in a health crisis doesn’t mean we can neglect the environmental crisis,” Trudeau said.

The government announced $1.7 billion in financial aid for Canada’s struggling oil and gas sector April 17, but tied the money to green goals: cleaning up abandoned oil wells and reducing methane emissions. The Liberals’ strategy is to continue to pursue climate goals while helping energy companies with the cost of compliance, a senior government source told POLITICO.

Alberta Premier Jason Kenney said Tuesday that support is not enough: “Canada’s energy sector needs much more action to survive this unprecedented shock and protect hundreds of thousands of jobs.”

Progress on other climate commitments has faced setbacks, however. Canada’s national budget, which Finance Minister Bill Morneau had promised would focus on climate change, has been delayed indefinitely. Plans for legislation to create legally binding emissions reduction targets and for an expert panel to guide Canada toward net-zero carbon emissions by 2050 are likewise on hold.

Environmental groups are now pushing Ottawa to focus on a transition to a cleaner economy once the crisis passes. “We need to reorient and rebuild the energy sector with a focus on clean energy, and rebuild jobs that are stable, resilient and sustainable,” Merran Smith, executive director of Clean Energy Canada, said in a statement.

China sticks to its five-year plan

China avoided a national Covid-19 lockdown but its economy has not emerged from the crisis unscathed. GDP dropped by 7 percent in the first quarter of 2020, and the government is preparing to implement a cumbersome new five-year economic plan starting in 2021. Li Shuo, an analyst with Greenpeace East Asia, worries that China will try to bounce back by leaning into “heavy industries and creative accounting,” rather than green investments.

Not everyone in the environmental community is as pessimistic. Barbara Finamore, a China expert at the Natural Resource Defense Council, praised China’s focus on intelligent transport and energy systems as a way to offset the economic effects of the coronavirus. That emphasis, Finamore said, will prompt “more focus on building Ultra-High-Voltage transmission lines, electric vehicle charging points/stations, and energy storage facilities that can help absorb more renewables into the power grid.”

Finamore also noted that a new Draft Energy Law that would implement binding renewables targets “at all levels of government,” is now open for public comment. “Many Chinese experts believe the country can peak its C02 emissions by 2025,” she said.

The rest of the world

In Brazil, however, new risks have emerged. The country has paused enforcement against illegal deforestation to protect its workforce after one-third of enforcement operatives were determined to be at high risk of contracting Covid-19.

Smaller and poorer nations face myriad challenges living up to the Paris climate agreement. About 120 countries rely on outside groups like the U.N., development banks and green NGOs like the World Wildlife Fund to implement their policies, and some lack reliable access to basics like the video platforms that are a new staple of global diplomatic work.

Ambassador Janine Felson of Belize, which hosted a virtual forum of the Alliance of Small Island States on April 22, said her nation already has pulled resources from climate change initiatives.