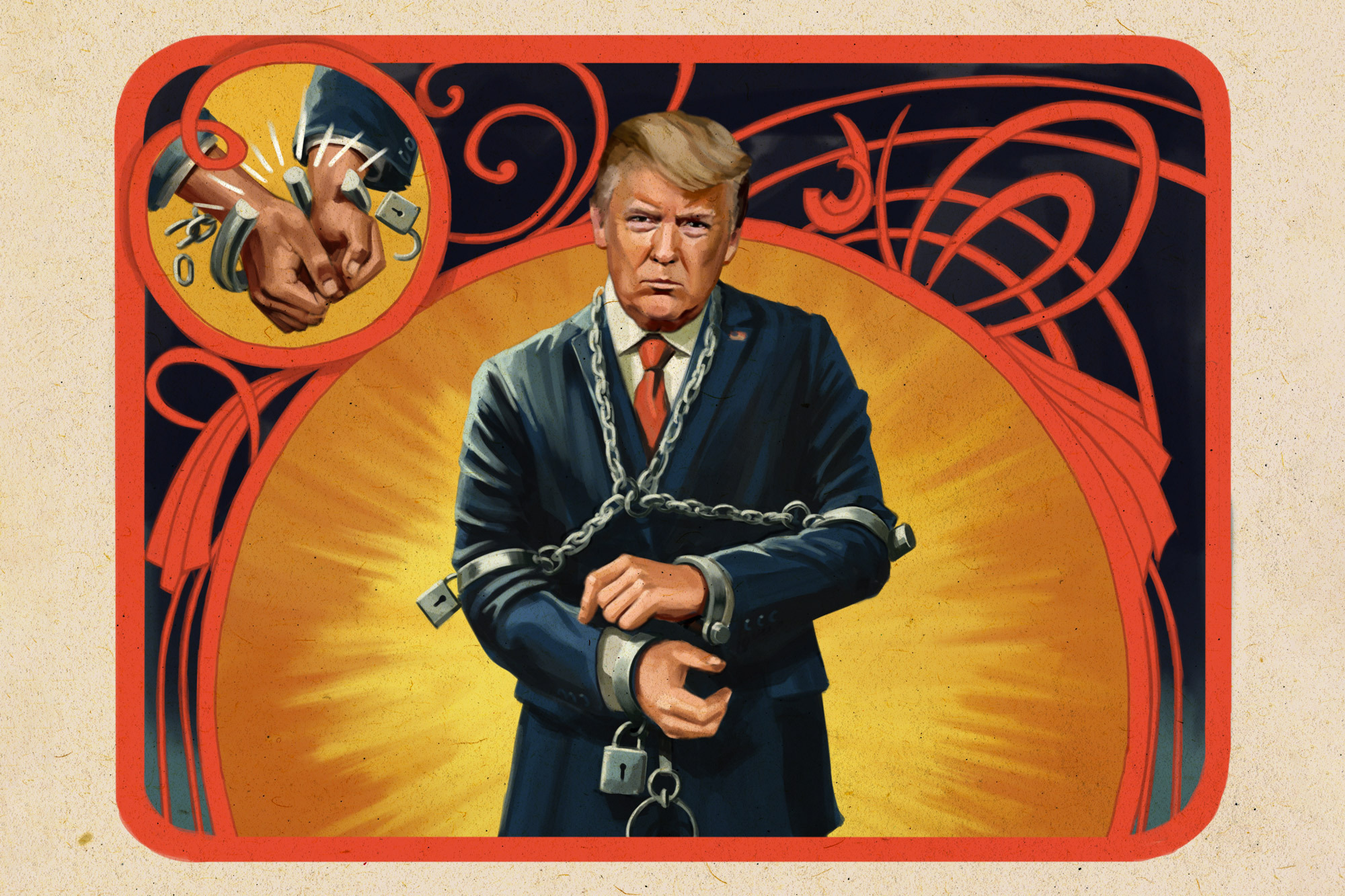 Underwriters of the stock deal had promoted the sheen of Trump’s well-known name and the sway it held with his typical day-tripping, relatively small-sum customers. “Defying reason,” Forbes said that fall, investors bit. “There’s a lot of brand equity in Trump’s name,” a stock analyst told USA Today in November of 1995, “in middle America.” Trump was quoted in the article, too. “The general public loves Trump again. They really never stopped loving Trump,” he said.

Trump spun from the confidence of a certain portion of the population money for himself. “The ’95 thing injected him with new cash,” said David Cay Johnston, the Pulitzer Prize-winning reporter who covered Trump and his casinos for the Philadelphia Inquirer and then the New York Times, “and allowed him to argue that he was this great genius.”

That in turn allowed him in ’96 to fold into his publicly traded company his other two Atlantic City casinos, first his Taj Mahal, then his Castle. And maybe equally importantly, people buying what Trump was selling let him buy time—time, it turned out, until 2004, when television impresario Mark Burnett began to re-pitch him to watchers of “The Apprentice” on primetime as the epitome of American business brawn. Buffed and on screen, Trump appeared to be an infallible, decisive CEO with a Midas touch past.

That catchy pop-culture depiction buried the much less flattering reporting repeatedly laid out in the business pages of the biggest and most mainstream newspapers and magazines. Gauged as a whole, Trump Hotels & Casino Resorts was “a flop,” Shawn Tully of Fortune wrote in March of 2016, as Trump as a presidential candidate left in his wake the Republican primary pack and began to take aim at Hillary Clinton. It “damaged thousands of shareholders, bondholders, and workers.” Losers everywhere. “The sole ‘winner,’” explained Tully, an experienced financial scribe, “now packs arenas across America, mesmerizing tens of thousands of cheering fans with tales of his business triumphs.”

Tales remains the operative term. Because the contest at hand is not only between Trump and the ravages of Covid-19, or Trump and “Democrat” governors, or Trump and any of the reporters spread out in the seats in the briefing room these evenings at the White House. All of it is part of the larger war for Trump between the numbers and the narrative. Will this president, as has been the case with other presidents, be punished at the ballot box for a woeful reality, not always of their making—or will enough of the voters of 2020, like the investors of the mid-1990s, be susceptible to Trump’s proven brand of brazen persuasion?

There are people I talked with for this story who side with the implacable numbers. Death tolls and unemployment and impossibly long lines at food banks, they say, simply can’t be swamped by even the most tenacious attempts to scramble storylines.

“I am definitely in the camp of not this time,” said political scientist Rachel Bitecofer, who predicted with startling accuracy the results of the 2018 midterms. “Body bags,” she said, leave “an indelible impression.”

“The Trump magic only works if he’s got gullible audiences, or at least curious audiences,” said Mercieca. She’s the author of the book due out this summer about the “rhetorical genius” of Trump. But she still thinks this skill set has its limits. “And if we’re really miserable in November and we may well be very miserable, then I think people probably are going to associate that with Trump.”

There are also, though, those I spoke with who believe Trump has the capacity to cloak the numbers and recast them as positives, not negatives—that he, in essence, totally could talk his way out of this by telling a better story. Could Trump get reelected? In spite of a plague? In the midst of wide-ranging economic devastation? These people all but sighed when I asked.

“Yes,” said Tim O’Brien, the Trump biographer who’s a columnist for Bloomberg Opinion and served as a senior adviser for Mike Bloomberg’s presidential bid. “He is so uniquely pathologic and uniquely remorseless, and I think it gives him this reptilian energy to continuously deny, spin and move forward,” O’Brien continued. “And November’s a long way off.”

“I am definitely in the camp of not this time. Body bags [leave] an indelible impression.”

O’Donnell, O’Brien and others see him doing what he did in those years leading up to that spring and summer of 1995.

“Trump is a simple guy with a few basic moves,” former Trump P.R. man Alan Marcus told me. “He always goes back to what’s worked in the past.”

“He’s obviously positioning himself for the long haul here,” O’Donnell said. “For all his lack of knowledge about so many things, he’s pretty darn media-savvy, and he’s working this right now almost brilliantly to the extent that he realizes the value of putting himself out there every day, and even if he doesn’t say the right thing every day, and even if he contradicts himself, what he’s doing is he’s laying a framework to defend himself. He’s spinning this every day now: 2 million would have died if it wasn’t for me—and it’s pretty clear it’s not going to get to 2 million—so whatever that number is beneath it, whether it’s 100,000 or 200,000, which is just horrible, to him it’s a victory. And he’s going to present it as that.”

It’s what he’s done for decades, hawking these kinds of alternative narratives—first and foremost the lie that he’s a self-made man—and these narratives have been remarkably successful, and protective, too.

“He also has been uniquely insulated from the consequences of his own mistakes his entire life,” O’Brien explained, “first by his father’s wealth that insulated him from his educational and then business mistakes; and then celebrity, which insulated him from being forgotten, even though he was a joke as a businessman at that point; and then this third ring of fire—the presidency—which has insulated him legally from the consequences of his corrupt behavior. And I would say there’s a likelihood that in 2020 he gets insulated from being defeated because he’s able to make a pandemic a winner for himself.”

Many people I talked with said Trump’s already turned this calamity into opportunity, pointing to his nearly daily briefings, which by some accounts are like his rallies only better—because they happen more often and are watched by more people. Their efficacy is very much an open question. Polling is showing the benefits are fading, as the briefings have grown longer, less focused and more contentious. Struggling with mounting coverage painting him as a heedless, feckless ditherer who ignored numerous dire warnings, Trump has stuck unwaveringly to a characteristic P.R. offensive, accepting no “responsibility,” claiming “total” authority, and presenting himself as an on-it and unassailable manager—putting his name on mailed-out CDC guidelines and stimulus checks while relentlessly shifting blame for this “invisible enemy” to the World Health Organization, China, states he says weren’t prepared enough, governors he thinks don’t thank him enough.

“Never underestimate Donald Trump,” said Sam Nunberg, a Trump adviser during the 2016 campaign. “He’s able to adapt to any situation.”

In the past, too, Trump stared down these existential threats with small, sometimes seat-of-the-pants teams on the 26th floor of Trump Tower, not as an incumbent president backed by a sweeping, sophisticated, funds-flush reelection operation—his campaign and adjacent entities raised $212 million in the first quarter and have raked in more than $1 billion overall—well-equipped, ready and willing to fight these next six and a half months on a narrowed, drastically altered front, a “virtual” campaign that could be defined by screens and fear.

Come November, Trump could win again, say political strategists associated with both major parties, not in spite of the coronavirus but because of it.

“If I was Brad Parscale,” Greta Carnes, the national organizing director for Pete Buttigieg’s presidential campaign, told me, referring to Trump’s campaign manager, “I would be salivating right now, because this is the exact kind of environment where Trump will do well.”