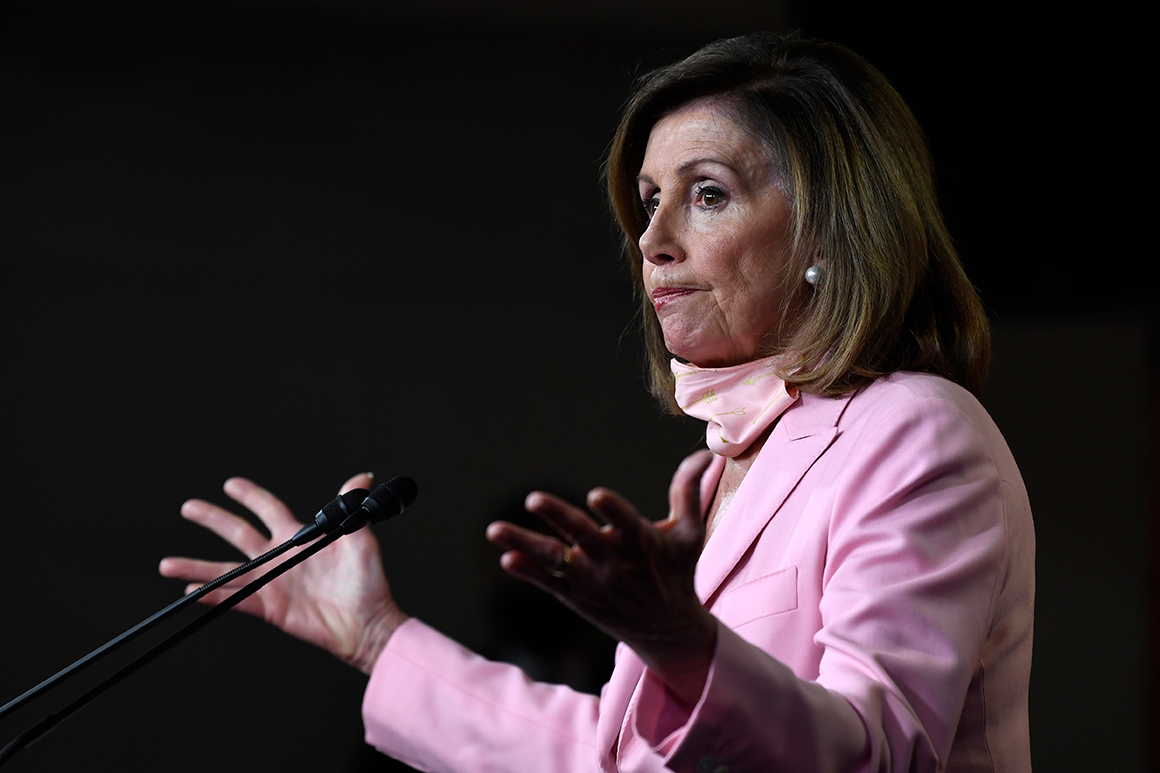 The plan stands virtually no chance of being taken up by the Republican-controlled Senate but comes amid new concerns over health coverage amid the coronavirus pandemic and the economic crash.

It would further subsidize Obamacare markets by expanding federal help for premiums and cost-sharing. And it would do away with signature Trump administration policies like expanding the availability of short-term plans that compete with Obamacare coverage.

The plan incorporates some key aspects of House Democrats’ drug pricing bill, including language to make Medicare negotiate prices closer to what’s paid abroad. That could be a sweetener for progressives who negotiated with Pelosi for months to move the party reforms further left.

Pelosi’s office didn’t respond to a request for comment.

Democrats are hoping for a repeat of their 2018 mid-term electoral success without alienating moderates and protecting incumbents in swing districts. They’re also trying to draw a contrast with the Trump administration, which on Thursday is expected to file a brief with the Supreme Court that calls for striking down the entire health care law, in a case brought by conservative-led states. President Donald Trump last month affirmed that he’s standing firm on the push to kill the law, even though some top administration officials have argued it could hurt Republicans chances, by eliminating protections like a ban on discriminating against people with pre-existing conditions.

The legislation Pelosi and her leadership team crafted could still antagonize her party’s energized liberal flank, whose members have railed against a “bailout” for the insurance industry while pushing for an expansion of public coverage that isn’t tied to employment.

“This has made so many of our arguments crystal clear,” said Melinda St. Louis, who runs the “Medicare for All” campaign at the advocacy group Public Citizen. “It’s exposed the folly, in our view, of tying health care to employment at a time when tens of millions of people are losing their jobs and their insurance.”

Pelosi spent the first half of the 116th Congress trying to appease progressives, allowing four committee hearings on Medicare for All. However, the House’s two top health panels didn’t wind up advancing legislation that would bring about a government-run health system.

Democrats also introduced a range of bills to offer public insurance to more people — including dropping the Medicare enrollment age to 50.

The coronavirus pandemic has bolstered progressives’ calls for Medicare for All, since more than 40 million Americans lost their jobs. Most people with commercial insurance get their health plans through work, and the economic fallout has driven many to Medicaid and the Obamacare health exchanges — or left them uninsured.

In April, a group of 30 House Democrats led by Rep. Pramila Jayapal (D-Wash.) called for allowing anyone who loses their health insurance because of the pandemic or its economic fallout to enroll in Medicare.

In May, Sen. Bernie Sanders (I-Vt.) put out a plan that would have the government directly cover health care costs for both the 87 million people who were lacking health coverage before the coronavirus struck and the tens of millions more expected to fall into that category. His cosponsors include two senators currently in contention to be Biden’s running mate — Kamala Harris (D-Calif.) and Elizabeth Warren (D-Mass.).

Biden has fully embraced the ACA as the core tenet of his own health care platform, but he also pushed beyond the law by embracing a public option that could compete against private insurance plans. His website says the provision will lower costs by forcing down hospital and doctor prices.

Biden has also reached out to progressives, by setting up task forces that include top Medicare for All advocates like Jayapal.

House Democrats privately acknowledge the leadership bill was largely crafted for campaign messaging and to boost the fortunes of vulnerable freshmen who flipped red seats in 2018. Pelosi is set to unveil the bill at a press conference featuring Reps. Colin Allred (D-Texas) and Lauren Underwood (D-Ill.).

“I imagine it was about making something as palatable to as much of the caucus as possible and highlighting the differences between the parties on health care during the week the Trump administration unveils its court brief on eliminating the ACA,” a House Democratic aide told POLITICO. “It’s always the right time to expand health care coverage, but especially in the middle of the pandemic.”