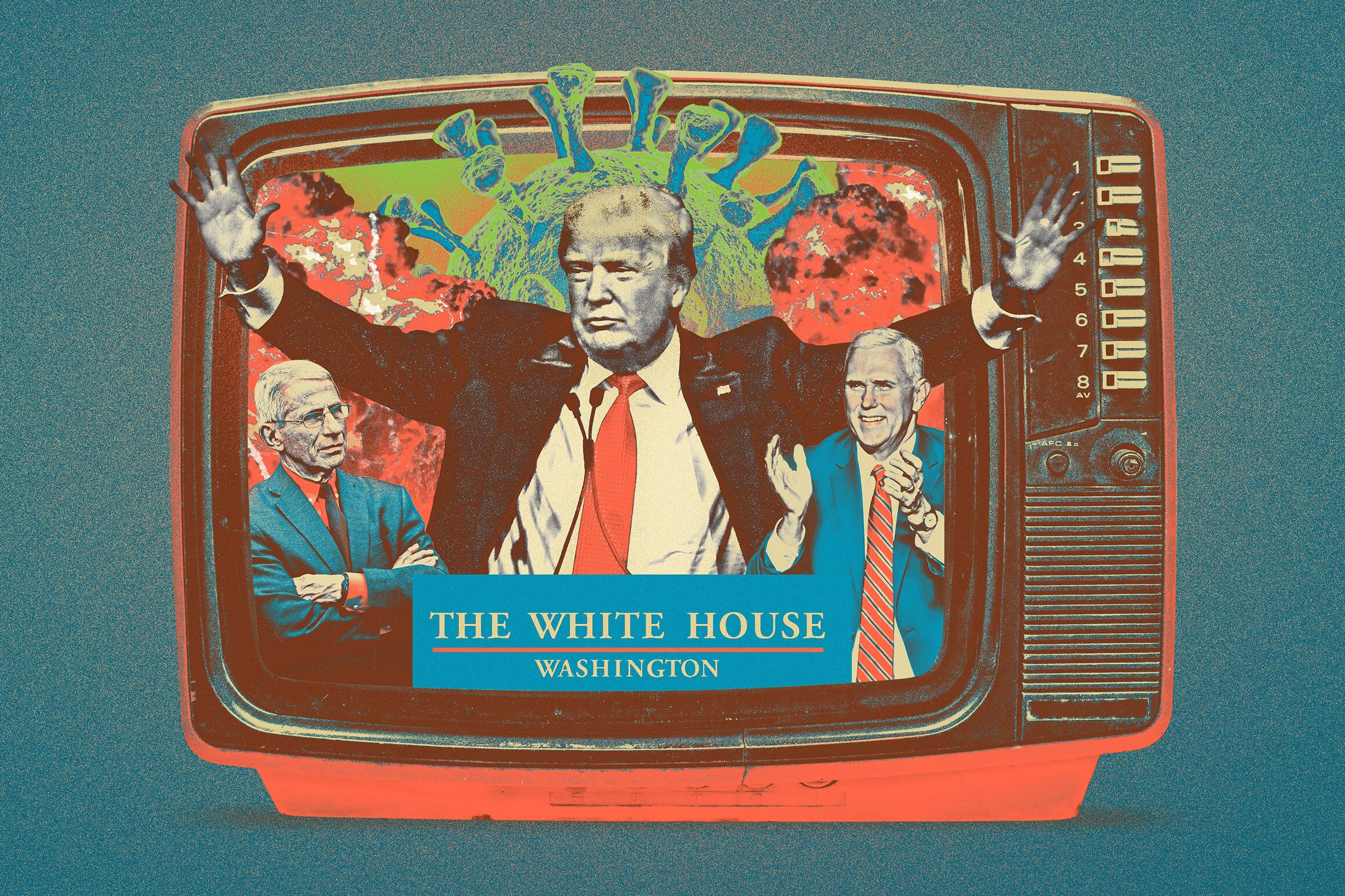 When pressed for nettlesome particulars, he has stepped aside for Pence, for Birx, for immunologist and task force member Tony Fauci and others—resolutely, practically reflexively shifting the blame. To his predecessors (“we inherited a very obsolete system”). To (Democratic) governors. To China.

“Where are the tests?” Trump was asked on March 18.

The masks? This was the next day.

“Your administration,” a reporter asked on March 22, “eliminated a key position in China in July—a medical epidemiologist embedded in China’s Disease Control Agency—and it was just months before the first cases were spotted in Wuhan. So the question is, basically, why the post was eliminated …”

“Anybody?” Trump said, looking at the people with him on the stage.

And the showman president has ended every briefing with promises of more to come.

“We’re making a lot of progress,” he said Friday, “and we’ll see you folks tomorrow.”

There are limits, needless to say, to Trump’s attempts to shoehorn what he accomplished with his raucous rallies into this smaller, staider space, and with a steadily shrinking audience of socially distancing reporters who are focused on one subject only—the most sweeping public health emergency in more than a century.

Without, say, a Mark Burnett on hand to hack at the narrative incoherence and mold the visceral, minute-to-minute ad-libbing into some tidy, salable shape, Trump in the course of these briefings so far has ended up (as he has done throughout the bulk of his existence) often contradicting himself.

Untethered from what he has said in the past, unbothered by what he might have to say in the future, focused totally on what he must do to fight his way through the immediate present, Dan McAdams’ “episodic man” has called the press “very fair,” “very fair” … and then “very dishonest”—coming to an especially ugly head in the interaction with NBC’s Alexander. “What do you say to Americans who are watching you right now who are scared?” Alexander asked. “I say that you’re a terrible reporter,” Trump said. “That’s what I say.”

He has dubbed himself “a wartime president” while nonetheless insisting the federal government is not “a shipping clerk” for necessary medical supplies. He often has placed the onus on governors. “We’re sort of a backup for the states,” he said Sunday.

He has gone from being upbeat one day to dour the next.

“August. Could be July. Could be longer than that,” he said that day, responding to a question concerning when normalcy might return. As much as five months or more.

But he lost patience with those sober projections just a week into the war. “It’s not going to be three or four months,” he said, “as some people were saying”—first and foremost himself. “America will again, and soon, be open for business—very soon—a lot sooner than three or four months that somebody was suggesting. A lot sooner.”

“Easter,” Trump said during Tuesday’s briefing. “What a great timeline that would be.”

What a good story.

What a pleasing finale to this season of the show.