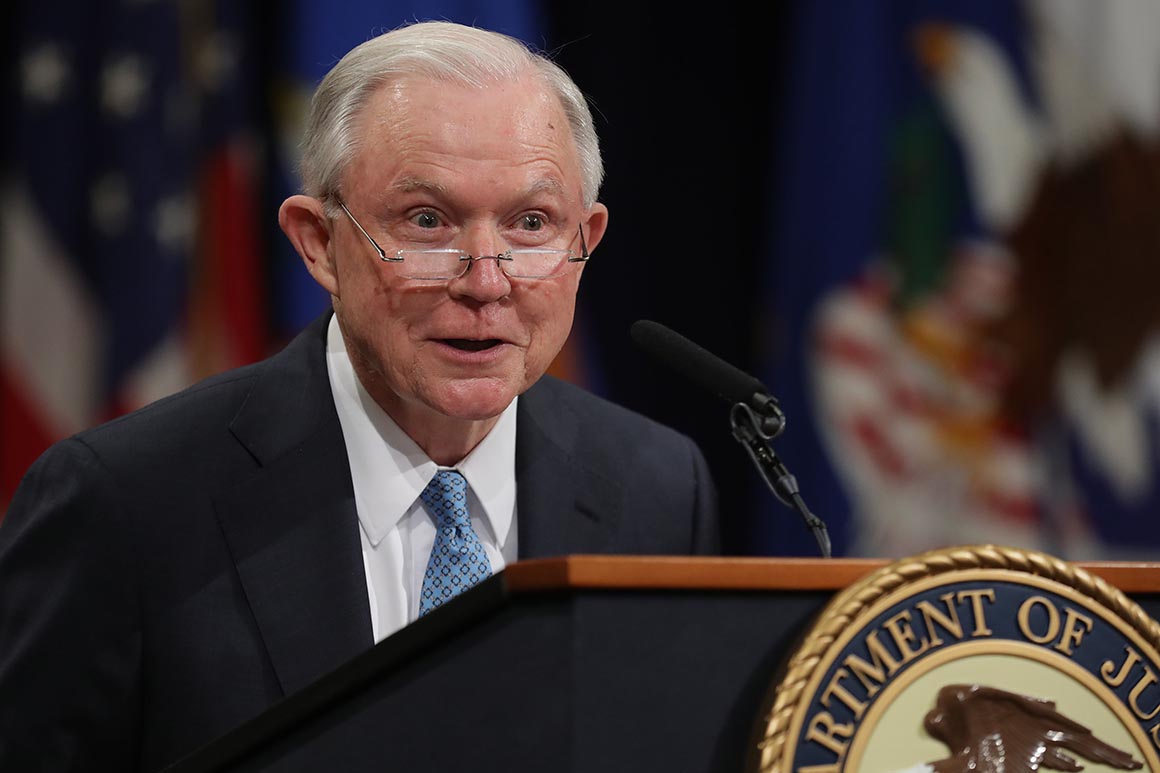 BIRMINGHAM, Ala.—On paper, the July 14 matchup in Alabama’s Republican Senate primary runoff would portend a blowout favoring the home team. Jeff Sessions, a 73-year-old Selma native, is vying to regain a seat he held for 20 years, during which he was considered the most popular politician in the state. As an incumbent, Sessions never faced a primary challenger, and in his last race, in 2014, he ran unopposed. “You couldn’t beat him with anything,” says Steve Flowers, a former Alabama state representative turned political commentator.

Sessions now faces Tommy Tuberville, a 65-year-old Arkansas native with no background in politics and scant connections to this state, except for having served as head coach of the Auburn University football team for 10 seasons more than a decade ago. Before he declared his candidacy last year, Tuberville hadn’t spent much time here since 2008, when Auburn essentially ran him out of town with a $5.1 million contract buyout after a losing season.

And yet, polling gives “Coach Tubs,” who bested six other candidates in the GOP primary in March, a lead of as much as 23 points over Sessions in the runoff (which was rescheduled from late March because of the coronavirus pandemic). The Business Council of Alabama and other past big-money Sessions backers in the state have stayed silent—and mostly closed their wallets—in the primary, as well.

In recent weeks, I spoke with voters and political watchers here to try to understand this shift. The easy narrative is that it’s all about Donald Trump. The president garnered 62 percent of the vote in Alabama in 2016, and he has spent years lambasting Sessions, his first U.S. attorney general, as weak and disloyal before endorsing Tuberville after the first round of the March primary. But Tuberville’s astonishing lead over a native son is partly a local story, too: a mix of football obsession, the appeal of outsider status in Alabama politics and the “winner” branding Trump has found a way to exploit, here as in many other states.

Trump’s support for Tuberville—the president plans to hold a rally in Mobile to reaffirm his endorsement—was never guaranteed to tip voters toward the coach. Trump in fact has a poor track record in Alabama, endorsing the losing side in both the primary and general election during the 2017 special election for the seat Sessions vacated when he joined the administration. Voters in this state, says Wayne Flynt, a historian and an author who has written extensively about Alabama politics, have a “kind of damn cantankerousness” and “aren’t like those other states where you have a powerful leader, and they just do what the leader says.”

While the voters I spoke to said they wouldn’t vote for Tuberville just because of Trump, there’s no denying how much the president’s criticisms of Sessions on the national stage—amplified by Trump’s Twitter feed, national and local media, and Tuberville himself—have shaped the race here, and dramatically revised some Alabamans’ opinions of one of their own.

Trump has spent years pillorying Sessions, the first U.S. senator to endorse his presidential run, for Sessions’ 2017 decision as attorney general to recuse himself from overseeing the FBI probe into potential connections between Russia and Trump’s 2016 campaign. In angry barrages before and after Sessions resigned in November 2018, the president has called him “scared stiff,” “slime,” “a disaster” and “not mentally qualified” to be the country’s top prosecutor. (Sessions’ campaign did not respond to requests for comment for this article, nor did Tuberville’s.) Choosing Sessions as attorney general, Trump said in a 2019 interview, was the “biggest mistake” of his presidency—a decision many Republicans, including in Alabama, believe built up momentum not only for the Mueller investigation but also for Trump’s impeachment.

“Recusing himself from his duties and helping the Democrats—that was enough,” says Jasper resident Johnny Burnette, who supported Sessions in prior campaigns but says he now plans to vote for Tuberville. “I like Jeff, but he messed up.”

Flowers, who switched from a Democrat to Republican in the early 1990s, told me he attended a Rotary Club meeting soon after Trump first started attacking Sessions. “People were vitriolic,” he recalls. “It was ugly, mean-spirited.”

“This constant drubbing from the president … painted a picture of [Sessions] being untrustworthy and weak,” adds Robert Blanton, chair of the department of political science and public administration at the University of Alabama at Birmingham. “He has been unable to emerge from the shadow of Trump’s criticisms.”

Sessions’ old school politics of gentility and his staunch conservative track record—which worked for him here for decades—may not be able to withstand that onslaught.

Tuberville might be a political novice, but he’s not a nobody here. To appreciate how a coach could become the frontrunner in a U.S. Senate race, it helps to understand Alabama’s obsession with college football, specifically the rivalry between the state’s two largest universities that dates back to 1893. In some parts of the South, folks ask where you go to church. In other parts, it’s who’s your daddy. In Alabama, the question when people size you up is: Tigers or Tide?

Auburn fans revere Tuberville, and with good reason: He led the Tigers to six consecutive victories over Alabama’s Crimson Tide in their season-ending matchup, the Iron Bowl, and helmed an undefeated season in 2004. Even Alabama fans grudgingly admit he’s a winner. “Being a football coach in Alabama really means something, and being a very successful football coach really means a lot,” says Flynt, the historian.

And some of the skills Tuberville developed in football could serve him well in politics. Being a head coach requires complex organization and leadership. Tuberville also was considered a master recruiter of football prospects, demonstrating an ability to persuade players and their families from all walks of life to join his team.

“He’s like one of us,” says Mike Rabren, 54, a retired general contractor who now runs a hunting preserve near Auburn. “He’s a blue-jeans wearing, boot-wearing good ol’ guy. He likes to hunt. He likes to fish. He likes NASCAR.”

When Coach Tubbs, who also toyed with running for governor in 2017, declared his Senate candidacy, he already had high name recognition in the state. That helped vault him past a field that included climate-change denying Congressman Mo Brooks and Roy Moore, the former Alabama chief justice who was twice removed from office and lost a 2017 special election for the Senate seat amid allegations of improprieties with teenage girls when he was a young prosecutor. Tuberville, who received 33.4 percent of the vote in the March primary, has a strong base in rural Alabama, and has campaigned hard throughout the state, traveling with a bus festooned with a big sign reading “Tuberville + Trump 2020.”

Tuberville carries some baggage. As the head coach at Texas Tech after he left Auburn, he abandoned recruits at a dinner when the University of Cincinnati called him about coaching that team. He also was involved in a scheme that defrauded investors of $1.7 million; his co-defendant was imprisoned, while Tuberville settled in 2013 under undisclosed terms. But Tuberville still has the advantage of being a political outsider in a state that mistrusts politicians. That was much of Trump’s appeal in Alabama in 2016. Tuberville is riding the same wave in 2020.

“People just kind of had enough of the status quo, and that’s really what this race is all about,” says Robby Segars, 55, a commercial developer in Auburn who developed a friendship with Tuberville during his coaching years. Although Segars has voted for Sessions in the past, he now supports Tuberville.

“We need to get out of this cycle our state and government have been in for years,” adds Rabren. “We need someone who has new ideas to go up there and help Trump make a change.”

Karen Johnson, an office manager for a court reporting service in Mobile, voted for Sessions in the primary. She says she admires his integrity and appreciates his lifelong connection to the state. She’s “90 percent sure” she’ll stick with him on July 14. “If Trump says ‘no,’ that won’t make me automatically say ‘no,’” she says, even though she counts herself a Trump supporter. But she still sees Tuberville’s outsider status as an asset.

There are still Republican voters here who defend Jeff Sessions.

“I understand President Trump,” Joe Fesenmeier, 55, a Mobile business owner, and an avid Trump supporter, told me. “He felt betrayed by Sessions. But, by the same token, if Sessions had not recused himself, I think the Democrats would have used that.”

“I had some issues when he recused himself from the Russia investigation,” adds Johnson, the Mobile office manager. “He caused a trauma that we didn’t have to have as a nation. But I do think he did what he had to do because he did work on Trump’s campaign.”

Sessions’ base—he received 31.6 percent of the vote in the March primary—includes the kind of older, evangelical voters who backed him in the 1996, 2002, 2008 and 2014 Senate elections. But he’s not used to primary opposition. And in a state where straight-ticket voting accounts for as much as two-thirds of ballots cast, relatively few Alabamans have had to make a conscious decision to vote for Sessions in decades.

A genteel, conservative ideologue, Sessions embodies old school politics. The lifelong Republican is a party establishment figure, a former state and federal law-and-order prosecutor whose nomination to a federal judgeship in 1986 was scuttled amid allegations of racism (which he vehemently denied). Named for two Confederate figures—Jefferson Davis and Gen. P.G.T. Beauregard—Sessions champions the preservation of Confederate monuments. (Tuberville has not made an issue of this in the campaign.) And in the Age of Trump, Sessions is buttoned down, not boisterous. He simply doesn’t excite voters, Flynt says.

“We’ve passed into a new era,” he says. “The terrain has shifted, and what got him elected in the first place is no longer applicable. He’s just outlived his time.”

Amiable and outgoing, Tuberville seems to have more accurately read the shifting political and winds. “God sent us Donald Trump because God knew we were in trouble,” he says in a campaign ad that also depicts him in hunting gear and carrying a shotgun.

There’s very little policywise that differentiates Tuberville from Sessions. (“You could literally switch almost all of the text of the campaigns’ respective websites without anyone noticing,” says Blanton, the University of Alabama at Birmingham political scientist.) And both have enthusiastically embraced Trump in their campaigns (now largely virtual because of the coronavirus)—even Sessions. Tuberville has billed himself as Trump’s man from the beginning, parroting the president on immigration and other issues (even as it was Sessions who helped shape the administration’s immigration policy) and calling the mainstream media “fake news.” And while Trump has continued to hammer Sessions, the fallen attorney general, too, has voiced support for the president and his policies, constantly contrasting himself with other former administration officials who have written tell-all books after running afoul of Trump.

Still, after Trump tweeted in May imploring state voters to “not trust” Sessions because “he let our Country down,” Sessions responded with a rare rebuke. “I did my job & you’re damn fortunate I did,” he tweeted. “It protected the rule of law & resulted in your exoneration.”

Few political observers here give Sessions a strong chance to beat Tuberville and go on to face Doug Jones, a Democrat considered the nation’s most vulnerable incumbent senator, in November’s general election. Tuberville has ignored Sessions’ repeated calls for debate in the final weeks before the runoff. He seems to be trying to let the clock run out.

“Tuberville’s too smart a coach, too strategic a coach,” Flynt says. “When you are a four-term U.S. senator who has been denounced by his own party’s president and you start demanding debates, it means your campaign is on life support. Tuberville recognizes that.”